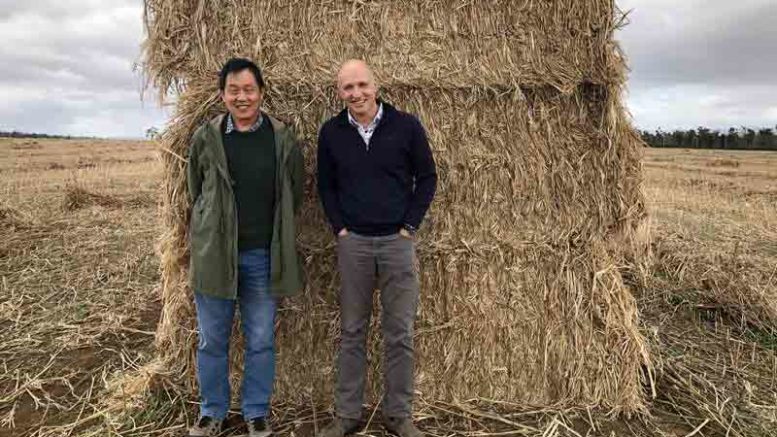 CSIRO's Menghe Miao and Stuart Gordon at a property near Conara, Tasmania where samples are being collected.

A project in Australia will map out technical needs for a processing value chain that makes use of stems from hemp plants grown mainly for seed.

Predicated on “dual-cropping” in which more than one part of the plant is put to commercial use, the project is being led by AgriFutures Australia, a government agency that supports research and development with a focus on new and emerging industries and rural communities.

While recognizing the growth and stability of Australia’s hemp food seed sector, “over the longer-term growers will require value from the crop’s fiber and hurd to maintain viability,” said Stuart Gordon of the Australian federal government’s national science body, the Commonwealth Scientific and Industrial Research Organization (CSIRO), which is also taking part in the initiative.

Gordon said Australian hemp straw will require logistics and processing technologies that are different from the systems currently used in the northern hemisphere to process longer stemmed fiber hemp varieties.

Australian straw from seed plants generally ends up broken and largely unretted after harvest and is commonly burned off as a waste product. With the exception of the small island state of Tasmania, the crops are also typically produced long distances from other plantations and processing centers, Gordon noted. “The condition of the post-harvest straw and distances require new approaches and processing technologies to realize the fiber value from the straw,” he said.

Gordon said that while Australian engineers have produced small scale, affordable, mobile decorticators that separate the hurd from the stem over the last several decades, downstream machines are needed for further refining to meet the expectations of the composite materials sectors such as hempcrete construction and bioplastics, as well as textile makers.

“The project is a great opportunity for those of us processing waste grain stubble to play our part in the accelerated development of the whole-of-plant market in our region,” said Andi Lucas, founder of X-Hemp Pty Ltd, a Tasmanian processor.

The technology development project is co-funded by AgriFutures Australia and the CSIRO, with the project funding level at AUD$600,000 (~€384,000/~US$459,000) over a two-year period. Financial support is split equally three ways among AgriFutures, the CSIRO and industry representatives X-Hemp and Doyle Rural Services, who are providing in-kind support in the form of raw materials and other assets.