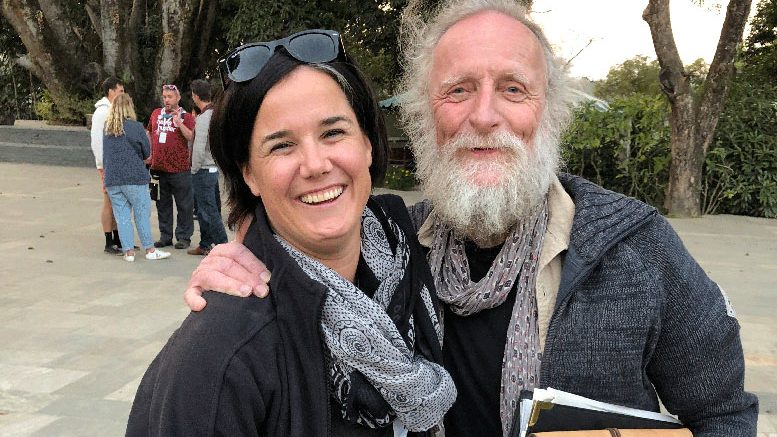 By Andi Lucas
Special to HempToday

As an absolute newcomer to the world of cannabis, the Asian Hemp Summit 2019 is the first industry event I’ve attended.

Inspired by a chance meeting with Alicia Fall from Her Many Voices and hemp industrialist Eric McKee in Denver last year, I’m happy to say that making the decision to travel to Kathmandu, Nepal for this event was the right one as this has been an incredibly worthwhile experience.

While I have a deep interest in learning more about cannabis and hope to work in this space, the truth is that I effectively have no knowledge of what exactly the plant is, what it can do, or who the current industry players are, so I leapt at the opportunity to come to Himalayan hills to absorb as much as I could about hemp.

With around 100 others representing 25 countries, I was privileged to hear the words of several of the leaders in this fascinating field over both conference days.

The passion of hemp advocates Dan Herer and Hana Gabrielova for the potential of this plant was apparent to all in the room. Hearing of the powerful impact made on Hana when she read the influential book written by Dan’s late father ‘The Emperor Wears No Clothes’ while she was studying in the Czech Republic in the late 1990s was not lost on me, especially in the context of seeing the work Hana has been doing at the global level to make the hemp plant fully free.

If any of us needed reminding of the impact one activist can have on the world – and with the current political and actual climate in the world, I don’t think I am alone in needing this message to be reinforced right now – hearing from Dan and Hana was a good place to start.

The presentations and hemp knowledge-fest then just kept on rolling! Coming from a small business background and with the hope of either starting up or investing in an existing enterprise this year, I found the perspectives of Daniel Kruse (CEO, HempConsult GmbH), Paul Benhaim (CEO, Elixinol Global), Phil Warner (CEO, Ecolife Science) and Carl Sheeler, PhD (Founder, Two Bears Farm) particularly interesting.

As a Tasmanian who moved to Colorado in 2009 to start a business at the height of the global financial crisis, and being fully cognizant of the many hurdles faced by any new enterprise, let alone one with the additional legal and legislative aspects of using the cannabis plant, I was amazed to see the speed of growth in this market.

There are obviously enormous amounts of capital now flowing through the hemp economic ecosystem while the industry as a whole is still forming. The additional challenges faced by entrepreneurs in this space due to a lack of education around the material and its potential uses was one of the most fascinating aspects of this conference experience to me.

My personal interest in the cannabis plant as a raw manufacturing material and its many possible industrial applications began a few years ago after traveling to Shenzhen, China to visit the factory who were producing the products my previous company were manufacturing from injection molded plastics and metal. This trip – along with another to Swaziland working on a documentary about rhino poaching – exposed me to the reality and interconnected nature of poverty and ecological destruction.

While I have always voted Green, recycled my beer bottles and compost like a pro, I know this is not enough and began to think more deeply about some of the many challenges being faced by the planet, as well as my role in contributing to these problems and potential solutions.

Having had the privilege of splitting my time between my native state of Tasmania and adopted home in Colorado since 2009, I have watched with interest the way that the state and federal laws in the United States and around the world have been changing in relation to the cannabis plant.

Looking for a fit

I started to ask myself how I could apply my knowledge and experience in manufacturing and selling products in a way that was a better fit for my core values, and as I started doing more research, time and time again I kept finding myself reading about hemp. I honestly had no idea things were as advanced in the business world as they are, and was engrossed in hearing what Daniel, Paul, Phil and Carl had to say.

Listening to the words of the legendary Steve Allin (Director, International Hemp Building Association) and Wolf Jordan (Founder, Wolf Jordan & Company) left me with a couple of key takeaways. The first was how lucky the attendees at this event were to have an opportunity to hear from two compassionate and highly intelligent people who hold such deep knowledge and experience in the world of hemp. The second was more in the vein of “…seriously, you can do that with the fibre?” and “…wow, I really, really don’t know anything about anything to do with hemp and have SO much to learn” and “…are these two humans both in the running for the Most Interesting Man in the World award?”

It was an absolute privilege to meet both of these men, along with the many other brilliant, hilarious, irreverent, dedicated, innovative and interesting humans who were here in Kathmandu for this summit.

While I have connected with and was impacted by too many of the other speakers to list, special mention should go to Morris Beegle and Rick Trojan from bringing a little bit of rock ‘n roll to the proceedings and to the incomparable Jane Wynne for her beautiful message of hope on the final afternoon.

I know I wasn’t alone in the thought that having this amount of experience and knowledge in one room was a gift, all thanks to the hard work put in by Nivedita Bansal Shah & Dhiraj K. Shah, Brian Houlihan, Kehrt and Marzenna Reyher for putting this conference together.

Like Jane Wynne and many other attendees I have spoken to, learned from and laughed with, the Asian Hemp Summit 2019 has given me a renewed sense of purpose and hope, and for that I am grateful.

Andi Lucas is Co-Founder & Chief of Operations at NSP Development