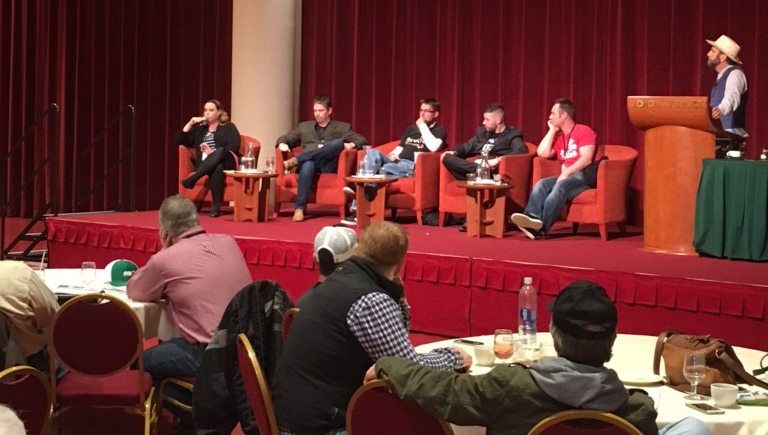 The last hemp factory in the U.S. shuttered its doors in 1958. Rens Hemp Company in Brandon, Wisconsin, had grown and processed hemp for such illustrious clients as the US Navy since 1914.

“It’s really exciting as a Wisconsin native to be back here and see hemp coming home to where it belongs. Great kick off!” said Aaron Rydell of Colorado-based Salt Creek Hemp Co. He was among some 200 conference participants from Wisconsin and other U.S. states who attended the inaugural event.

“We want to shine a big light on the people” bringing hemp back to the American Midwest, said organizer Melissa Peterson, who has been researching the market and who was instrumental in launching the conference, the first major hemp industry event in the region.

“We’ve been in the beverage industry for 12 years and are familiar with specialty crops. We’re the perfect people to be doing this,” Peterson said. “We want to focus on education. There’s money to be made, but it has to be done in the right way” she added.

Genetics and seed procurement turned out to be the hot topic at the conference. Many states, such as neighboring Minnesota, have strict guidelines on seed acquisition, stifling innovation in the market. “It’s like saying you can grow tomatoes, but you can’t buy the best tomato seeds” says Rydell.

By contrast, the Wisconsin Department of Agriculture, Trade and Consumer Protection (DATCP), has issued guidance informing growers to procure seed independently while DATCP awaits its importer registration approval. That means the department is turning a blind eye to how growers procure their seed this year based on interim rules.

Noah Hemstad of Edina, Minnesota-based Hemstad Genetics is excited. “There’s a ton of opportunity. These are some of the most progressive hemp laws in the country, and we’re in a great position to be the experts in the clone market for the Midwest,” Hemstad said of the Wisconsin guidelines, drawn from what state officials determined to be the best regulations from other state hemp programs.

Peterson gathered an all star lineup from the hemp industry as well as state officials and hands on experts to address the gathering. Author and hemp farmer Doug Fine opened the conference with advice for industry newcomers. Washington state activist Joy Beckerman and Morris Beegle, owner at Colorado Hemp Company and NoCo Hemp Expo, also were on hand to discuss policy and best practices.

Finalized Wisconsin hemp program guidelines will go into effect March 2, at which time farmers can begin applying for licenses. According to Vote Hemp’s 2017 Crop Report, there were more than 4,000 acres of hemp grown in the collective states that make up the Midwest Region. If the buzz at the conference is any indicator, expect that number to rise in 2018.