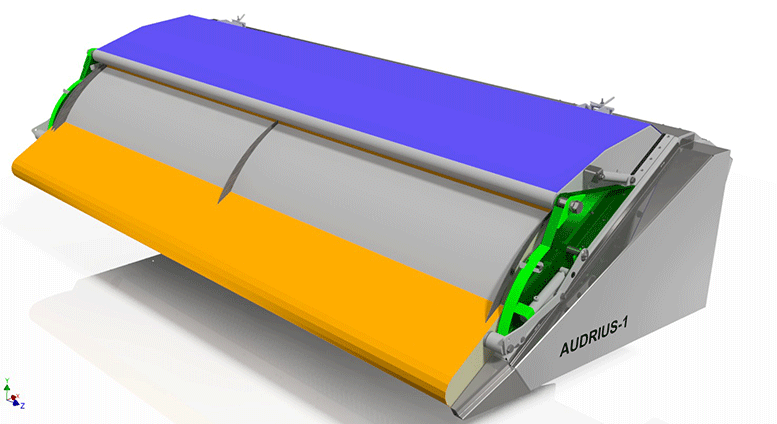 The 3.5m header under development by Hemp Spot.

That’s the price tag for a 3.5m (11’5”) header, which can be attached to small and medium-sized tractors outfitted with hydraulic front-mounted lifts for a conventional setup in which a second driver pulls a bunker alongside the harvesting ensemble. The harvester can cover 1.0-1.5 hectares (~2.5-3.7 acres) per hour.

Further processing through a separator the company has also developed (about €37,000/~$44,000) results in consistent biomass, a key factor in harvesting hemp flowers for CBD and other extracts, said Tomas Lunskis, Hemp Spot’s CEO.

“When you look at hemp biomass, it varies greatly between producers in terms of fraction size, moisture, consistency and overall quality,” Lunskis said. Hemp Spot’s technology overcomes that challenge, he added.

Combining Hemp Spot’s harvester and separator with a belt-driven dryer, completes a full processing system that yields food- and feed-grade seed along with the hemp flowers.

Hemp Spot will begin to build the customized 3.5m header through this winter, with plans to put the technology on the market next year.

Hemp Spot also offers a bigger, self-contained hemp harvester it has engineered by stripping down sugar beet harvesting technology made by German farm equipment maker Holmer and pairing it with a front-mounted header from UK-based Shelbourne-Reynolds. With a cutting width of 5 meters (~16’5”), and a harvesting rate of 2 ha (~5 acres) per hour, that combine sells for roughly €153,000 to upwards of €708,000 ($180,000-$835,000), depending on whether the Holmer unit is used or new.

Key advantages of the Holmer-Shelbourne combine include its weight and durability, a powerful 420 horsepower engine, ample clearance height, an oversized bunker which can quickly be unloaded, and cockpit positioning that gives the driver a clear view of the plant tops. Most importantly, the harvester, with adjustable cutting height ranging from 30cm to 4m (1.0′-13′), can be operated by one man, reducing harvesting costs.

Hemp Spot started tinkering with hemp harvesting technology six years ago, strictly out of need: “Even though hemp has been cultivated in Lithuania for thousands of years, when we started there was not much information on how to grow and harvest hemp on an industrial scale,” said Lunskis, who co-founded the company with his father Rimantas. “There was literally no equipment dedicated to hemp, so we rented various equipment that we thought might work. It didn’t,” Lunskis said.

Based in Rudiškiai, Lithuania, Hemp Spot farms 110 ha of hemp on its own fields and contracts another 100 ha from local farmers whom it supports with seed procurement, field preparation and harvesting. While the company has primarily been farming Futura 75 and Santhica 70, French hemp strains, Lunskis said the company is constantly test planting other cultivars.

Despite its relatively small land mass in comparison to other European countries, Lithuania is the second largest hemp growing country in the EU behind France, with hemp fields totaling about 9,000 ha (~22,000 acres) in 2019.