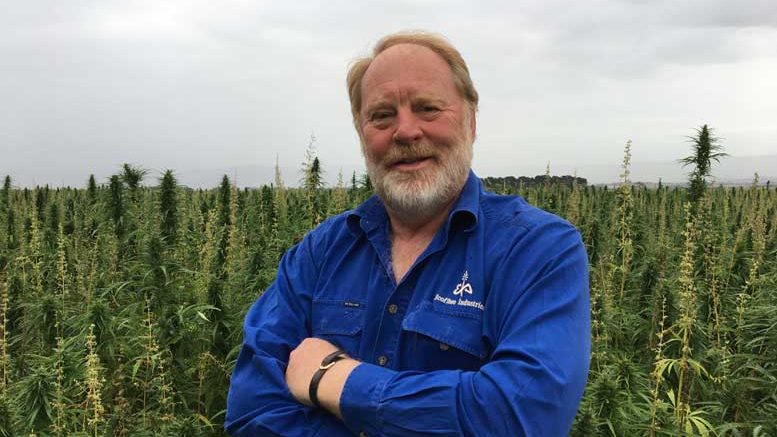 INTERVIEW: Phil Warner is CEO and Chairman of Ecolife Science, which works to advance new-era products for a sustainable future. He has more than 20 years hemp industry experience in China, Bhutan, Thailand, New Zealand, Australia, Europe, Africa and North & South America. Warner set up the world’s biggest most diverse cannabis gene seed bank. His former company, Ecofibre is an internationally recognized enterprise in hemp production and market development which invested more than $15 million into research and development of new high-yield commercial plant varieties, agriculture and processing.

HempToday: What’s your take on the whole question of using hemp bio-mass to create fuel? Is that a viable long-term winner?
Phil Warner: I think there are far better, more economically viable uses of hemp biomass than for fuel. Globally we are in desperate need of recyclable bio-materials that can be grown and supplied domestically for day-to-day consumer products. The issue really is that we haven’t developed technologies and systems to convert bio-materials that can do this better than hydrocarbons yet. This “system” is what I intend on researching. A device that can deconstruct bio-materials and reconstruct them in the forms we desire, then recycle them again and again.

What I imagine is the use of the science of “Chemurgy” using high tech equipment, sort of like a 3D printer but instead of hydrocarbon based materials, the raw materials are bio-based and recyclable, several times over. It is not going to be easy to achieve this but it is inevitable that something like this has to be done otherwise climate change will change our lives well beyond what is already anticipated. However, if we are able to recycle domestically, even locally, we will see a reduction of over 50% of the need for materials we presently dump in landfills.

By having things built with the purpose of recycling, with manufacturing systems built to do just that, we will reduce the need to produce new feedstock to make things out of. The knock-on effect is the reduction in the use of energy creating new feedstocks, the reduction and waste in transport of raw materials and the transport of finished goods.

HT: How do you see the potential for hemp in everyday things like paper and textiles? How fast do you see those sectors advancing?
PW: Hemp is a terrific feed stock, it is relatively uncomplicated in its biochemistry compared to other organically derived feedstocks such as trees. In its nano form it has enormous potential. For example, if we think about it enough, we realize the fundamental technology for textiles is 6,000 years old (spinning, weaving, cutting, sewing) and it hasn’t changed. It is obvious it’s time we moved to a higher level of technology similar to a 3D printing type machine to make clothing. In the US, the average individual’s consumption of textiles is 23kg annually. If we could deconstruct and reconstruct those materials time and time again, we would possibly only need 23kg of materials in a lifetime.

HT: Aside from being associated with hemp, what kind of companies and applications is Ecolife Science looking to invest in?
PW: Ecolife Science is looking at the biodiversity of the entire range of plants, not just for materials to make things out of but also food and medicine. Hemp/cannabis has many assets in this regard but there are other underutilized crops/plants that also can be used.

It is common knowledge that 60% of all vegetative food consumed is in the Big 4 crops, wheat, soya, rice and corn. The problem is, the Big 4 aren’t the best food we can consume to help with the general health of mankind. We need better nutrition, and hemp and other underutilized crops can help in that regard.

We often hear the next great medical discovery might come from the jungles of the Amazon. There are numerous plants that offer more natural medicines. It is my belief we now have the tools and capability to analyse these plants to see what may be of use in a way we have never considered before. Food, Medicine and Fibre. So why stop at hemp?

HT: What kind of people do you look for in this context?
PW: People who have imagination and don’t stop just because it seems highly challenging. Ultimately someone has to do something fast, radical, different. I fully believe we can fix things if we have the will to make it happen. What I am really talking about is the next industrial revolution.

HT: Take us on a world tour: How do you see things at the global level. Which regions or countries would you point to as ones to watch?
PW: Ingenuity is the key, so the new discoveries and methods are most likely to be where the need is greatest and the political environment is conducive to supporting radical ideas for industry to meet consumer demands. It will be hard to pick where or what to watch other than to say it is likely to be a collaboration from different countries and regions of like minded people who all have a similar goal. Putting our ideas and concepts out there is the beginning.

HT: How important are education and research in the mission you’ve set out for Ecolife Science?
PW: The aim of Ecolife Science is moreover to support radical ideas and research. While there are existing concepts of what needs to be created to overcome climate change I am sure there are other concepts that may even be better. We are open to supporting anything that has a reasonable potential.

HT: What would be your advice to a young entrepreneur or startup who wants to get into the hemp industry?
PW: A successful industry depends on a number of successful businesses throughout the entire value chain from plant science to finished product. We all have different capabilities, things we are good at. Rather than try to do it all, find other businesses that are either side of what you can do, understand their issues and work towards a making a success. Most of all, learn from others who have had similar challenges, draw knowledge from history. If you don’t need to reinvent, it will save you time and money.