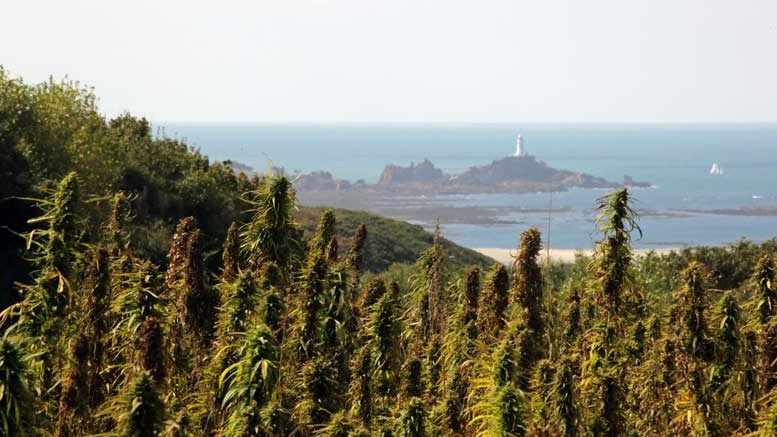 Hemp farmers on Jersey, the largest of the Channel Islands between England and France, are adding hemp to the local agriculture mix, seeing the crop as a solution to existing problems caused by long-term potato farming, and cashing in on biomass and seed.

Hemp’s re-emergence is part of a larger initiative to diversify Jersey’s agriculture industry, with tea and honeyberry crops also being planted in other parts of the island.

After years of interest in hemp, partners Dave Ryan, Kevin Mars and Blair Jones came together to create Jersey Hemp, hoping to revive the plant as a crop. The company started in 2017 shrouded in some mystery as only limited details were provided to the media initially. After being granted a cultivation license the three current and former firefighters planted hemp at Warwick Farm, which was once Jersey’s nurseries site. Last year they grew a quarter of a hectare for test crops but that has grown to 30 hectares this year.

Hemp was once widely cultivated on the island but declined in recent decades. CEO David Ryan told HempToday. “During the late half of the 19th-century hemp was widely cultivated in Jersey to make fibres for sails and rope in the shipbuilding industry,” Ryan said. “Some say Quennevais (a local area in Jersey) originates from the Jerriais chanevière, meaning ‘land where hemp was grown’.”

The team is investigating if hemp can tackle the eelworm problems which arises from intensive potato farming. The pest, also known as potato cyst nematode or PCN, is a big threat to potato crops because it damages roots and tubers. “We are aware that the intensive farming of potatoes has taken its toil on the soil. Hemp can be part of the solution to these issues,” Ryan said.

Alongside potato farmers, Jersey Hemp is also collaborating with some of the dairy farmers on the island. “We are building relationships with them for a planned approach for soil remediation schemes and acting as a break or mop-up crop.” Ryan said. It’s envisaged that by using hemp in their crop rotation, Jersey farmers will see significant savings on their costs of land management.

Jersey Hemp also hopes to provide income to farmers through the renting of their land and other activities. Farmers will also be eligible to collect subsidies for not using excess herbicide to manage their fields.

This was the first year cultivation was conducted on a large scale. Last year’s test plot trialed four varieties for both seed and fiber: Futura 75, Uso31, Fedora 17 and Secuieni Jubileu. However, this year they only grew Finola on 30 hectares “for ease of harvest this year and for seed yield,” Ryan said.

Both seasons have been successful but have also offered unique challenges. “We have had higher than expected yields for both seed and biomass in each year.” Ryan states. That’s despite difficulties faced with the 2017 summer being very wet and stormy and 2018 being the second hottest and driest ever recorded, Ryan noted

To date, the Jersey government has been supportive of their project. “The beauty of our little Island is that we have a close relationship with our government.” Ryan said. He believes this is great for communications and also for getting to grip with the complex issues surrounding the hemp industry. The relationship “helps us to move forward in a positive and efficient manner.” Ryan adds.

“We are really excited about where Jersey Hemp is going and the next level of research and development that we are moving into,” Ryan said.