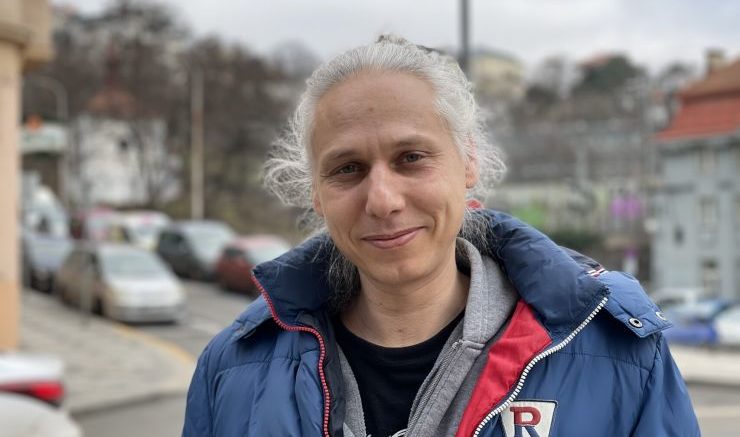 Robert Veverka is a Czech cannabis activist and journalist, and the publisher of Legalizace magazine, which has been published since 2010. He sits on the Prague Council Commission for Drug Policy Coordination, and is a member of the Security and Education commissions of the Prague 2nd municipal borough. He is also publisher of Cannabis and Cannabis Therapy Magazine. Veverka was convicted last year of “inciting and promoting toxicomania” in a Czech court, based on content published in Legalizace.

The cops came after you when one man who was arrested for growing pot mentioned Legalizace. So what’s the story of how all these troubles got started?

Robert Veverka: The man arrested confessed that he knew he was doing something illegal. He grew dozens of cannabis plants with seeds he said he saw in the magazine. The police evaluated his testimony as valid information, although they did not provide any evidence. In the end, it turned out that I was convicted, while in the case of the grower, the criminal prosecution was suspended.
After his arrest, the police got interested in the magazine, which has been running without problems for ten years, and evaluated it as “defective in content.” So they prosecuted me for spreading drug addiction, and after two hearings I was found guilty, sentenced to a fine and a suspended sentence. Of course, we have appealed.

On the one hand, the public is regularly terrified by reports of grandmothers growing flowers for ointments whose gardens get trampled by commandos. On the other hand there is a headshop on every other street in Prague. How did the state of current legislation affect your case?

RV: Everything is more or less based on ignorance. Few people know about cannabis laws, and few people can reasonably apply them in practice. When you’re in court for cannabis, the authorities often have marijuana and hashish in mind, which arouses emotions and, of course, often affects the verdict. They accused me of giving the impression that cannabis cultivation and use is legal – which it has been for a long time!

Cannabis is regulated according to THC content, defined by legislation, and if you adhere to legal limits, you can legally grow, harvest and further process cannabis. The law does not hold that when you touch a cannabis flower, you’re automatically sentenced to death.
Based on my case, I can allegedly commit a crime by publishing a magazine without really seducing anyone to use addictive substances. So we raise awareness in the magazine, inform about current cannabis legislation, and yet the police and the court perceive it as a crime.

Did the court accuse you of anything else?

RV: The authorities have blamed me only for “inciting and promoting toxicomania,” which allegedly took place in many ways. For example, an article criticizing police practices in raiding grow shops in 2013 was considered “defective.” They also cited an expert article on cannabinoid treatment, which we translated from a renowned foreign medical journal. They described most of the articles as unacceptable simply because they were about cannabis.

It looked very promising for cannabis in the Czech Republic less than a decade ago. In 2013, medical cannabis was legalized, then Minister of Health Svatopluk Němeček promoted medical cannabis. However, his successor Miroslav Ludvík was definitely not a supporter of cannabis.

RV: A very important thing happened more than a year ago, when the payment of medical cannabis from public health insurance was made possible. This has shifted the perception and made cannabis available to a lot of people. At the same time, however, activities are taking place against the entire cannabis scene.
Legalization of medical cannabis in 2013 was followed by a nationwide raid on grow shops. In addition, stories of people who have been prosecuted or convicted for having a few cannabis plants for personal use are constantly appearing in the media. In short, the number of victims of cannabis prohibition is constantly increasing.

The health insurance is progress, but what’s ahead for cannabis law in the Czech Republic?

RV: I definitely trust the current government more than the previous one. I believe they will be able to set some effective cannabis regulation. Some meaningful steps were very poorly enforced by the opposition simply because the coalition party did not want to let the opposition enforce anything.
Today we have a much better chance of having a meaningful discussion on cannabis in the Chamber of Deputies, and I believe that the question will no longer be whether or not to regulate cannabis, but how and when.

And at the European level?

RV: The Czech Republic is waiting for the EU presidency this year, which offers us an ideal opportunity to introduce the topic of cannabis regulation at the European level, or at least open a discussion on the protection and guarantee of human rights, obligations and freedoms in relation to drugs. The matter of drug legislation exposes the extremes in European countries, from a completely liberal approach to an absolutely repressive one.
And perhaps it would be appropriate to unify this legislation because of the basic characteristics of the EU, such as the free movement of goods and people.
Opponents of legalization in the Czech Republic have often used the argument, “we will not be Europe’s cannabis garden.” Now it’s clear that countries such as Malta, Luxembourg and, soon, Germany, will be happy to play this role.

The Czech Republic recently raised the limit for THC in industrial hemp from 0.3% to 1.0%. What will that mean?

RV:  This is good from a business point of view because the Czech Republic can become an attractive destination for entrepreneurs from other countries. This regulation is mainly a harbinger and a sign that cannabis regulation can and does change. Also, we have recently seen that EU countries are looking for a way to end cannabis prohibition and are preparing legislation that legalizes cannabis for both commercial and personal use. It is proof that such steps are possible if there is political support for them.

RV: The war on drugs is incredibly hypocritical. It is inefficient and ineffective, built on the stigma that cannabis is something dangerous. Repression is very expensive and it really destroys society and human lives. The war on drugs has made no sense in the long run, which was finally confirmed years ago by the UN itself when it called on individual countries to work on national regulations that meet local needs.
Civilized and developed states are retreating from the prohibition of cannabis and seeking meaningful regulations not only to fill state coffers and save money spent on senseless repression. They’re also doing it to protect human rights and freedoms and guarantee the use of cannabis as a tradable commodity, generally through clear and effective legislation that can provide legal certainty for citizens.

What do you expect to happen next with your court case?

RV: We filed an appeal against the verdict, which was also filed with the Public Prosecutor’s Office, to whom the sentence seems demonstrably low. The prosecutor demanded the confiscation of property from the company that publishes the magazine as part of the punishment. Now we are waiting for the appellate court, which will deal with the case sometime in March or April this year.
As part of the appeal and the entire defense, we demand that the court clearly state where and in which articles or texts I actually committed the alleged crime; in what way were those articles really defective; and in which sentences or paragraphs I committed the crime of spreading drug addiction.”The whole paragraph about that in the charges against me is completely vague, subject to arbitrary interpretation and easy to abuse, as this case ultimately shows.

What would be the broader implications if your conviction is upheld?

RV: I am afraid that my final conviction would be a terrible legal example that could cause trouble for all other Czech media that write about cannabis in any positive way. Freedom of information is part of an educated, informed society and its absence means a gross trampling of rights and freedoms, the right to information and freedom of expression. The moment any medium sets out on the imaginary thin ice of drug information, it could get into the same problem as me.