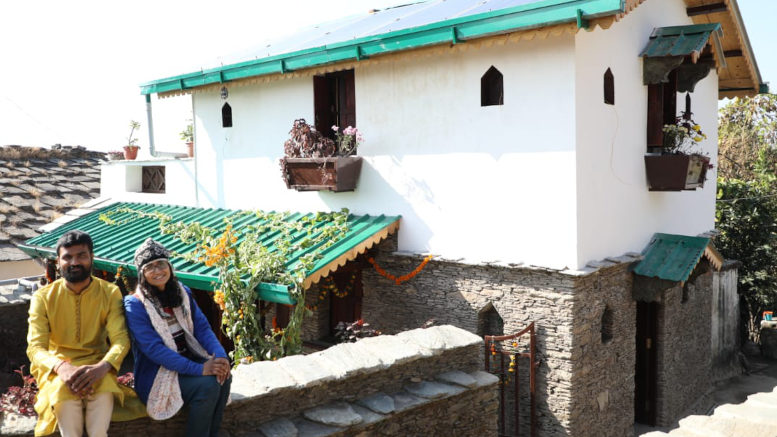 A startup in India’s Uttarakhand state has completed a hemp-based home it hopes will serve as a model for the expansion of sustainable, affordable housing in the state’s northeastern Himalaya region.

Green builders and materials supplier GoHemp Agroventures, based in Faldakot, Pauri Garhwal, Uttarakhand near the Himalayan foothills, said the region can reduce dependence on conventional raw materials used in construction by making use of hemp stalks that have been considered waste by local growers.

Architects Namrata Kandwal and Gaurav Dixit, a husband-wife team that head Gohemp, put such waste material through a decorticator developed by Namrata Hemp Company, a related entity, to turn out hurd for hempcrete and fiber used in the 800 sq. ft. model home, where they live and host interested tourists.

Hemp in the Himalayas

Dixit said hemp walls in the home are performing well, proving their viability in the Himalayan region, where dwellings need effective insulation. Faldakot, located at approximately 1,000 meters above sea level, experiences temperatures ranging from 0° to 35°C (32° to 95°F) and monsoons from July to September.

The lightweight nature of hempcrete also makes it well suited to the area, which is in a seismic zone; and the material is a perfect environmental fit in the Himalayan global heritage region, where building is monitored under strict sustainability guidelines.

Indian experts have said the use of hempcrete could considerably reduce dependence on virgin construction materials needed for conventional building. “India is yet to arrange 60% of the building material that will be needed by 2050, which means there will be immense pressure on virgin minerals used in concrete construction,” Avlokita Agrawal, associate professor in the department of architecture at Indian Institute of Technology, Roorkee, recently told the Times of India. “Materials like hempcrete will be of tremendous benefit in taking the load off these natural resources.”

Roughly three tons of hemp stalks were sourced from local hempseed growers for the hurd and fiber used in the five-room model home, Kandwal said. Walls were raised with the infill method, with some wall partitions made of hemp-lime blocks produced on site. Lime was sourced locally from Dehradun.

The house sits on a foundation of stone and mud mortar, and the cast hempcrete walls are finished with hemp fiber-reinforced lime and clay plasters. The frame is made from recycled Sal wood, a hardwood from trees popularly grown in India and Nepal, and the roof is insulated with a three-inch thick low-density hemp-lime mixture. The home decoration is eco-friendly down to the hempseed oil used to polish doors and window frames.

Sustainability in the home is also demonstrated by rooftop solar panels that provide three kilowatts of power, and a 5,000-liter underground water collection system.

The build cost roughly $39,000. Dixit estimates future builds could come in at $40 per square foot, but said that price could come down over time.

The decorticator that produced hurd for the house was developed and built in India by Namrata Hemp Company, a partner with GoHemp in a consortium that is developing the local hemp building supply chain. Priced at $13,000, the machine can process one ton of hemp stalks per day.

Uttarakhand is one of India’s leading hemp states, and local officials have said the crop has the potential to revive local agriculture and create jobs thorough the establishment of supply chains to feed into the Indian building and textile industries.