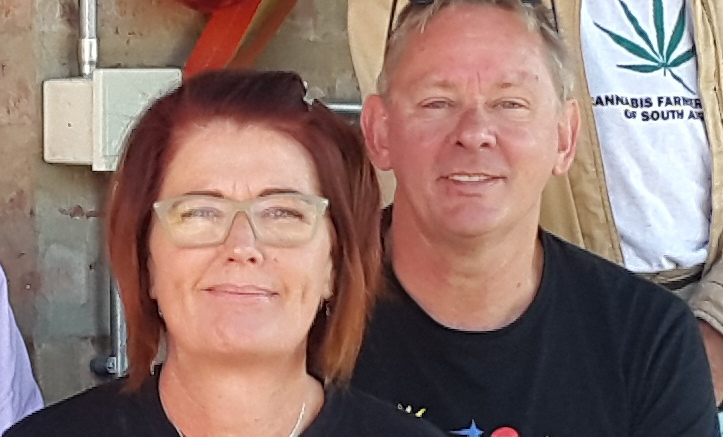 Myrtle Clarke and Julian Stobbs, "The Dagga Couple," in 2015.

[Updated: 14:08 July 4] Cannabis activist Julian Stobbs was remembered as a “hero” and “fearless warrior” as the South African cannabis community began to learn of his death today. Stobbs was murdered in the early morning hours in what law enforcement officials have so far called a robbery at his Lanseria farm near Johannesburg.

“They stole everything in the house, came back and went into the bedroom and shot and killed the husband,” Ian Cameron, Head of Community Safety at AfriForum, a civil rights group, told dispatchlive.co.za.

Stobbs and his partner, Myrtle Clarke – known in South Africa as “The Dagga Couple” – came to international prominence when they challenged the SA government rather than plead guilty to marijuana possession and dealing charges leveled against them in 2010.

“The cannabis community is mourning the passing of our hero,” said a statement on The Dagga Couple Facebook page. “The family is requesting that the public respect their privacy and allow Myrtle and the family some space during this difficult time. Thank you for the outpouring of love we have already received,” the statement read.

“This really is a tragedy for the cannabis culture in South Africa,” long-time South African cannabis activist and businessman Tony Budden told HempToday. “Jules and Myrtle worked tirelessly to bring awareness about the plant and its potential to the forefront in order to create an open industry that benefitted all South Africans.”

“He was a fearless warrior, somebody who was not afraid to state his mind and to stand up for what he believed in,” Gareth Prince, another SA cannabis activist told the website TimesLIVE. “He was a great warrior for the freedom of dagga. His memory will live on for as long as we remember cannabis.”

Stobbs and Clarke eventually sued seven governmental agencies responsible for enforcing South Africa’s cannabis laws, leading to the celebrated “Trial of the Plant,” which prompted a 2017 ruling by Western Cape’s High Court that marijuana can be grown and used at home, and an order for the South African parliament to change its Drug Trafficking and Medicines Control Acts.

“When they had the opportunity to pay a bribe, or go to court and pay a fine and get off, they chose to challenge the laws instead,” Budden said.

The couple were arrested in an August 2010 police raid on their home, which led to charges of possession with intent to sell marijuana. “We had a very heavy handed visit from the South African Police Service who, acting on a tip off, raided our property in search of a ‘drug lab’,” Clarke later said of the raid on the couple’s farm. “What they found was a quiet middle aged couple in their pajamas and a quantity of dagga. We were arrested after a five-hour ordeal in our kitchen.”

“I found myself with the police and a revolver on my cheek in my lounge,” Stobbs recalled of the raid.

“The more we thought about it, the more we realized this was a gross invasion of our privacy,” Clarke said in “Ordinary Criminals,” their joint 2015 TEDx talk. “This is about sovereignty, it’s about cognitive liberty, it’s about the very freedom of our minds.”

Acting on the advice of a legal adviser, the couple established the non-profit Fields of Green for ALL to manage their case, then built a social media following that attracted more than 50,000 Facebook followers all over the world.

Once their case got underway, Stobbs and Clark set up a way in which others charged with cannabis crimes could join in their legal efforts, and not be prosecuted until the couple’s own case was heard.

“They helped many people to get a stay of prosecution that way,” Budden said.

“Every Monday morning they’d be woken up to emails and calls from people who’d been arrested on the weekend, and they took it on to help so many people understand the law, get access to lawyers and get help,” Budden recalled.

The Dagga Couple toured South Africa, giving talks to rural communities and farming communities, presenting their manifesto, which they developed as a path to freedom for cannabis in South Africa.

They also took their message internationally, traveling to the United Nations in New York and appearing at hearings of the UN’s Commission on Narcotic Drugs in Vienna to champion their cause.

In preparing for their case, Clarke and Stobbs studied existing cannabis laws around the world, put together a team of progressive lawyers, and convinced international experts to testify on their behalf about the health effects of cannabis, and cannabis policy.

Their legal challenges led to rulings that stopped police from arresting adults for growing cannabis for personal use, based on their arguments that the country’s laws were “unjust and irrational, not supported by any empirical evidence, and outdated.”

Stobbs, a retired UK Royal Navy air traffic controller and art director in television and film, admitted openly that he had smoked marijuana for decades. “You forget to realize that everybody that uses any drug has rights as well,” he said ahead of a 2017 court hearing. “They are not animals and should not be put in jail.”

“We will use Jules’ passing to inspire us to work even harder, to see that his dreams don’t die,” Budden said. “That work will continue through Myrtle and the rest of us. We will pick up his sword and make sure South Africa sees the ‘fields of green for all’ that he envisioned.”