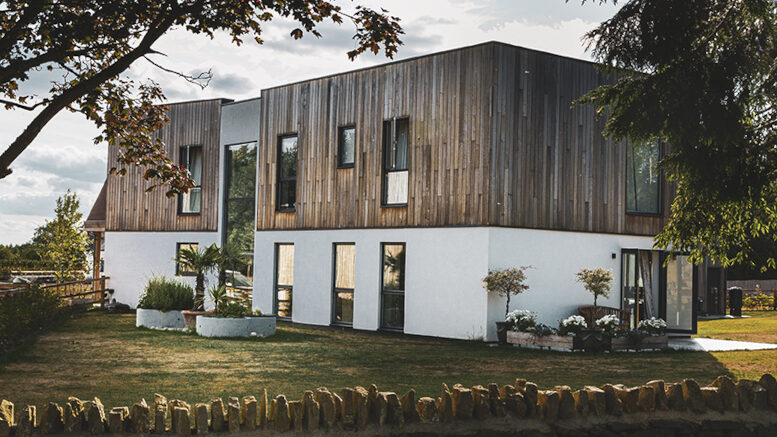 A UK building contractor said it has completed the last of 25 homes built from hempcrete panels in one of the country’s biggest sustainable residential development projects to date.

The homes were built using Biond, a system of pre-formed panels developed by Greencore Construction, a legacy green builder in the UK.

“We’re incredibly proud to build what we believe are the most sustainable homes in the country,” said James Pritchett, communications manager at Greencore Construction. “Springfield Meadows is an exemplary example of building beautiful homes with sustainability at their core.”

The houses meet performance under Passivhaus, a voluntary standard for buildings that require little energy for heating and cooling, and received certification under One Planet Living, an international initiative that advances construction projects that generate more energy than they use and sequester more carbon than they emit.

WSP, New York-based engineering services consultants, also validated the project based on carbon footprint criteria by assessing one 300 sq. meter house. WSP has said the carbon footprint for a 100-square-meter house is -27.8 tons (better than carbon neutral) compared to +120 tons for a traditionally constructed house of the same size.

Greencore said some houses have storage batteries, and residents in the development could export excess energy back to the grid in the future. Sensors and monitors are being deployed to record the homes’ sustainability performance.

By engineering the hemp panels and other fundamental structural parts offsite, buildings can be made weather-tight within a few days and be completed in six months, according to Greencore. That means the projects can be kept on schedule and budget.

Greencore sources its hemp hurd from East Yorkshire Hemp, which grows and processes up to 500 acres of hemp annually, according to its website.

While all homes at Springfield Meadows include private gardens, the overall development, designed to maximize biodiversity, also features common outdoor spaces including a wildflower meadow, orchard, and pond conceived in partnership with the Berks, Bucks and Oxon Wildlife Trust (BBOWT), which will monitor the wildlife and biodiversity of the development for the next five years. All Springfield Meadows homeowners were given BBOWT complimentary memberships when they moved into the development.

The homes feature solar collectors in the all-electric development, which includes an on-site electric car club and two Nissan Leafs that residents can rent.

“If we’re to reach the UK’s target of net-zero carbon emissions by 2050, we urgently need our new homes to be of the highest energy efficiency and sustainability standards,” said Paul Nicoll, regional team manager at Triodos Bank. “By supporting projects such as Springfield Meadows, we’re helping to provide people with high-quality, community-focused homes, while also working to decarbonize the housing sector.”

The Springfield Meadows project has won a number of awards, including the OxProp Best Residential Housing Development 2021 and Property Development of the Year at the 2021 Property Investor Awards.

Greencore is led by Ian Pritchett, managing director, who has more than 30 years experience in historic building repair and environmentally friendly construction. The company started building hemp-based buildings in 2014 and provided panels used in the iconic Marks & Spencer Cheshire Oaks project, an early example of using hemp in a large-scale project.