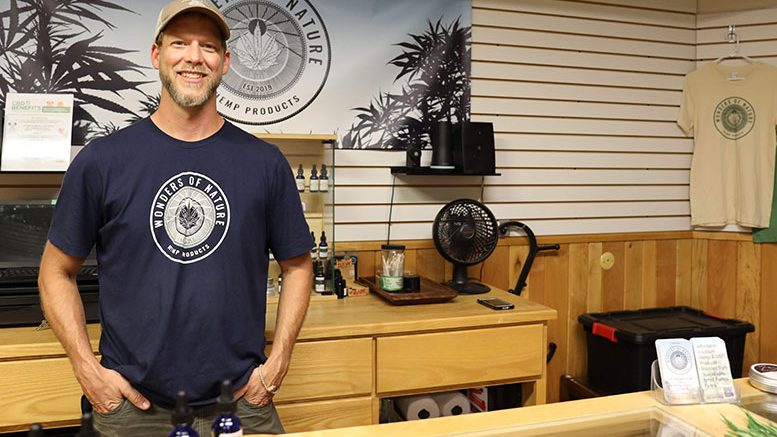 Wonders of Nature (WON) founder Chris Buske, 43, found himself naturally drawn to the hemp industry after seven years working as a licensed medical massage therapist in the city of Eau Claire, Wisconsin. A strong motivating factor was that both Buske’s parents were seeking pain relief, with Buske’s mother suffering from migraines for many years, and his father being diagnosed with Multiple Sclerosis.

These specific personal circumstances led to a greater openness to trying alternatives, and each parent found that they experienced some alleviation from their symptoms through the use of cannabidiol (CBD). After seeking out sources of good quality products at reasonable prices for his own use and for those in his close networks, Buske recognized a strong business opportunity in his region that would be closely aligned with his own personal values.

When the Hemp Farming Act of 2018 provisions became law, WON was already in receipt of wholesale raw material CBD tincture, and officially opened for trade on 1st May 2019. In addition to a regular presence at several local farmers’ markets, WON has a destination bricks-and-mortar storefront in Banbury Place. The business has been growing incredibly rapidly over these first four months, built entirely through word-of-mouth recommendations.

One unique selling point for WON is the production of culinary-level flavored oils. I tested one on the skin of my hand that smelled very much like the Christmas festive season with notes of cinnamon, vanilla, ginger and a host of other natural additives contributing to a really complex aroma and presumably, a pleasant taste. A 30ml bottle with 1,000mg of full-spectrum CBD in a coconut oil-based medium-chain triglycerides (MCT) as the carrier for the CBD tincture retails between $65-$75. At this early stage of his business’ growth, Buske is making these products by hand either at home or in a shared commercial kitchen space.

Buske’s early career in retail is evident in his understanding of the importance of shelf appeal, with products attractively presented in low-or-no-waste containers that could be easily reused or recycled. Significant effort has been made with the inclusion of batch, lot and other identification numbers on the packaging.

Buske is licensed as a processor with the Wisconsin Department of Agriculture, Trade and Consumer Protection (DACTP) and provides this information along with details on where the raw source materials are coming from. All of these choices drive home the underlying philosophy of the business where the relationship between the farmer, processor, and end-consumer remains paramount.

The majority of CBD used in Buske’s products comes from crops grown on the Western Slopes of Colorado, with Rock ‘N Roots Farm, CBDX Farms and Friends & Family Botanicals supplying the plant materials that are then processed by Western Slope Extraction. Buske is passionate about maintaining close personal ties with his suppliers, only working with farmers who share his vision and philosophy with both business and farming practices. ProVerde Labs are Wonders of Nature’s preferred lab for CBD-level testing, charging $65 per sample.

While acknowledging there are definite challenges with getting consistent results with testing, Buske believes that a “…10% margin of error” is acceptable given the “…good safety profile” of CBD. This is seemingly a reasonable assumption given that CBD has been determined to be a relatively safe product for consumer use by the World Health Organization, and a practical operational decision for a small business owner given the lack of coherent and consistent regulation and standards in this rapidly growing industry.

You can smoke it

WON also offers smokable hemp flowers. Jonathan Miller from the U.S. Hemp Roundtable recently noted that while this consumption option makes up “…a very small part of the hemp and CBD marketplace… it seems to be the one that’s growing most rapidly,” and WON are clearly positioning themselves to take advantage of this anticipated demand. Buske has strong relationships with suppliers in the Rogue and Illinois Valleys in Southern Oregon for smokable flowers. Given the competitive nature of the market and difficulty finding quality growers for this potentially lucrative niche sector, Buske was understandably reluctant to share more specific detail on his raw material sources.

Buske stores the smokable hemp in sealed glass jars inside a wine fridge to preserve quality. Given that smokable hemp flowers are difficult for the untrained eye-or-nose to distinguish from a THC-laden flower from the marijuana plant, Buske sells the product in anti-tampering packaging. The product also comes with a QR code to assist law enforcement officials in their efforts during this legislative “grey area,” where individual states and counties in the USA have laws ranging from full recreational use of marijuana being allowed through to the limited use of industrial hemp as defined in the Farm Bill of 2018.

When I asked about how Buske felt about a possible change in Wisconsin’s state laws around medical and recreational cannabis, and how this might affect his own business, Buske told me that he believes “…marijuana is a limited market” by comparison to the vast range of hemp-derived products, including CBD. Right now, Buske needs the FDA and ultimately Congress to clarify exactly how CBD is going to be treated in the marketplace so he can stop putting the brakes on his rapid growth out of fear of no longer being able to trade unimpeded or inadvertently breaking a state or federal law.

What’s up in Wisconsin

Ideally, WON would source more raw materials closer to home, however, Buske believes it will take some time before local producers can match the quality and price point achieved by farmers with many more years of experience in states like Colorado and Oregon.

This year saw many local growers around Wisconsin planting hemp crops for the first time. While some have had great success, others are dealing with difficulties including finding appropriate genetic strains for the climate, coping with damage caused by hail or region-specific pests like the European Corn-borer, and finding dryers. From what Buske is hearing anecdotally, some growers had not fully anticipated or been prepared for some of these challenges.

While WON does carry product liability insurance, this was difficult to source and Buske had to go to a Colorado-based company as no local businesses would offer coverage. Securing banking services has also been a challenge. No larger established local banks would accept the WON business account or providing credit card merchant facilities due to the nature of the offered products.

While Buske is on a waiting list for the new pilot program launched by payment processing service Square for credit and debit card transactions and was able to find a “work-around” solution with a local co-op for a checking account, WON is largely a cash-based business. These financial infrastructure restrictions mean that WON does not yet have an online presence or sales channel yet, despite high customer demand.

Trying to prepare to meet compliance standards that have not yet been defined, all while being unsure of what that process will eventually entail or cost, makes it very difficult to grow a company. These types of systemic blocks are incredibly frustrating to ethical and motivated self-starters like Buske.

As I learn more about the world of industrial hemp, I seriously question the “ethics: of a finance sector who are happy to fund and facilitate the banking needs of those working in tobacco, alcohol, pharmaceutical and weapons manufacture, while balking at financing potentially profitable new businesses or handling revenues derived from the sale of the cannabis plant and its various byproducts.

Starting a company like WON is not for the faint-hearted, and Buske’s energy, passion and strong desire to educate will be three key critical factors to his business’ much deserved future success.

Freelancer Andi Lucas is the founder and owner of NSP Development. After a decade running start-up businesses in Colorado, USA, she is currently working her way back to her native home of Tasmania, Australia with stops in 15 cities in the USA, UK, Japan and Costa Rica. This four-month-long period of travel is providing opportunities to meet with many passionate people working in the industry, exploring everything she can about hemp and writing about what she has learned along the way.