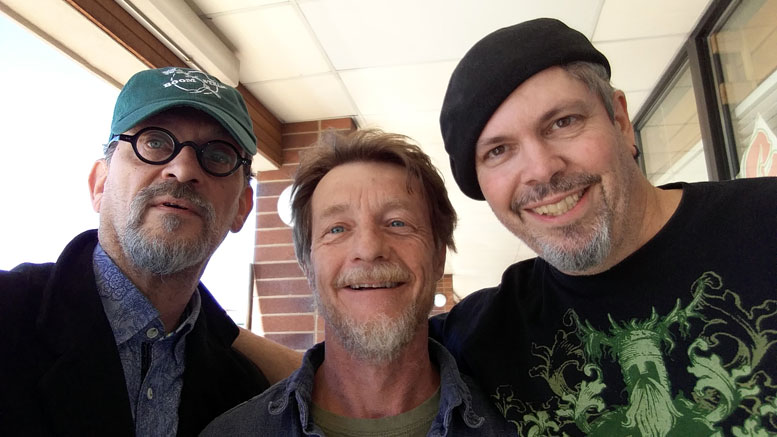 Nobody said anything about Trump. We tried to stir some level-headed discussion out at the public ashtray but nobody was taking the bait. At NoCo Hemp Expo 4 it was pretty much all about hemp. Dizzying that way, in fact. Man, we got a big country! And lots of big hemp ideas.

But we felt we were truly back home only after we met the guys from JustBen Agriculture in Pennsylvania. Farmers with PhDs, but real farmers – you could just tell it.

Debbie Cokes, The Dog Food Lady over at the RxCBD booth sold me. Guilt over all those table scraps we give Clara and Longin. They’ll get only CBD-laced treats from now on – for the anti-inflammatory benefits and help with allergies. But I’m mostly hoping they prove their promise to calm the yappers down. Me too. According to Dog Food Lady, I can share snack time with the dogs as the treats are beneficial (and no doubt tasty) to humans too.

Aside from the Expo itself, the demonstration tent was a hot spot, with sessions on such topics as “Cooking Creatively With Hemp,” “Coffee Roasting and Infusion” and “Hemp Paper Making.” The tent was especially crowded during two sessions by Colorado builder John Patterson, Tiny Hemp Houses, who gave two hands-on demonstrations about hemp construction.

Interestingly, on a separate HempToday-moderated B2B panel in the Let’s Talk Hemp Theater, hemp veteran Adam Dunn, Hoodlamb, identified hemp building as a sector to watch in the nearest future, quickly seconded by panel member Pamela Bosch, Highland Hemp House. Pamela reported during the discussion that she’s just received a permit to strip all the toxic materials from her wood frame home in Bellingham, Washington and replace them with hempcrete – which drew a round of applause. 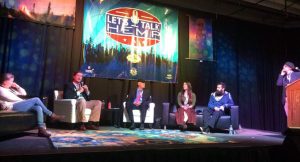 Also on the panel, Daniel Kruse, of HempConsult GmbH and Hempro Int., Dusseldorf, assured us that Asia WILL continue to be the source for hemp textiles, with China leading the way and India building momentum. And we should expect higher and higher quality out of hemp products from China, according to panel member Summer Star Haeske, Enviro-Textiles.

Out on the Expo floor, consumers flocked to the HempBoutique, organized by HempToday, which also drew retail re-sellers who showed a lot of interest in unique, top-shelf products from around the world: CBD formulas from HSI/France and HempHub/South Africa; hemp textile accessories from SHIV/Nepal; fashions from Cannamoda/Germany, Miret/Croatia (sneakers) and Hemp Chef/Poland; food from Hempoint/Czech Republic and Good Foods/Poland; and health and beauty products from Herbs & Hydro/Poland.

Pre-Expo, as we departed Thursday evening after setting up the HempBoutique booth, they were busy at a neighboring booth putting together what looked like a spaceship. By the time we arrived to open for business the next morning there was a futuristic looking installation from Elixinol – which is featured in an article in the special NoCo print edition of HempToday  that quotes former New York Giants star Leonard Marshall extolling the company’s products.

Our Man Out West 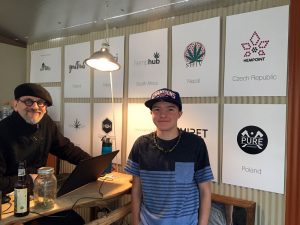 If you were on the Expo floor, you no doubt at some point bumped into Cameron Patterson, just named North American correspondent at our newly opened HempToday West bureau in Ft. Collins. (Watch for Cameron’s interview with Coach Freddie next week on HempToday.net). We’re also told Cameron’s a promising pitcher prospect.

As Tim Gordon, President of NoCo sponsors CBDRx and Functional Remedies, put it: “(NoCo is) the absolute best hemp-specific event in the world – continually the most highly recognized professional gathering of hemp industry professionals. Looking forward to 2018!”

Said author Doug Fine, a NoCo keynote speaker: “Even if hemp weren’t so important to America’s future, the NoCo Hemp Expo would serve as a prime example of an essential industry trade show: Connections and deals made left and right, education for everyone, and a whole lot of fun”

Two days with the dream chasers at NoCo

Having started several small business ventures, beginning in 1989, I’m always partial to bold souls who strike out on their own. Those who either ditched the 9-to-5 work life or clever enough to have never bought into it.

That will be obvious as you browse this issue of HempToday, our first edition put together especially for NoCo Hemp Expo.

They’re everywhere – from the peaks of Nepal, where Nivedita and Dhiraj Shah, Shah Hemp Inno-Ventures (SHIV) are collecting feral hemp and putting it to use in service of the downtrodden, to tiny Croatia where the brothers Domagoj and Boljar Hrvoje have transformed a 30-year-old family shoemaking factory into a producer of sustainable sneakers, all over the world the hemp business is full of creative mavericks.

Then there’s Poland, the focus of our cover story where, despite having lived for the last 25 years, I continue to be amazed by the ingenuity and vigor of the entrepreneurial class, and a current generation undaunted by the ever-shifting business landscape and not afraid to push back against the rules when they make no sense. They’re exploiting hemp for its every possibility, but also probing the science and tinkering with the technology – all the while raising consciousness about this incredible plant and the economic and environmental promise it holds.

Poland’s hemp startups can take inspiration all around Europe, where the industry continues at a headlong pace, and where some legacy hemp companies – many of which also started only with an idea and and a full measure of grit – are entering middle age as truly global players.

Everywhere, the industry advances in fits and starts. As we all know, hemp’s historical burdens can sometimes make the going rough. But if the dream chasers we present in these pages give only a small indicator of where hemp’s headed, there’s little doubt that, together, we’ll carry the load.