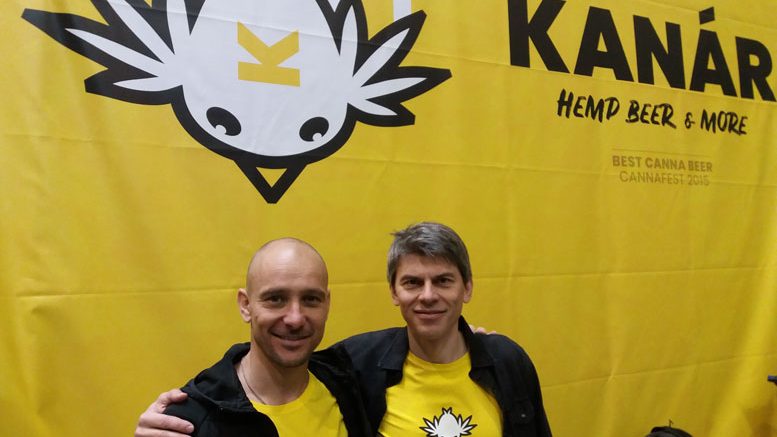 Owners of the Czech hemp beer brand Kanar (“Canary”) say their brew will soar higher over the next year as they ramp up output at Falkenštejn Brewery, a craft brewing plant in the small Bohemian town of Krásná Lípa in the northern Czech Republic.

Partners Jan Srb and Robert Maglen say the brewery has expanded its capacity and can now dedicate 1,000 hectoliters of hemp beer production per year from its total brewing capacity of 3,500.

After three years of bottling small quantities of the brand and serving it in local pubs – including a company pub on the site of the Falkenštejn Brewery — Kanar is just getting started expanding distribution and promotion of the beer, targeting the hipster market, organic shops and vegan and vegetarian Horeca outlets, said Maglen, who handles the company’s marketing.

Srb and Maglen met through a mutual friend after Maglen, a graphic designer, noticed the brand identity lacking when he encountered Kanar during a trip to a local pub. “The graphics definitely needed help,” said Maglen. The friend introduced him to Srb, who’d just fired his graphic designer – and the partnership was born.

“Kanar is our baby, so we’re very focused on quality,” said Srb, who serves the company as business and finance manager. That seems to be working as Kanar was just last month named the best hemp beer at Cannafest 2017, the cannabis expo held in Prague each November. Srb estimates there may be as many as 10 hemp beer brands on the market. The company also picked up the Cannafest award the year of the brand’s debut, in 2015.

“Our brewmaster is really interested in hemp, and he developed a truly original recipe,” Srb said.

The hemp in Kanar beer is made from fully organic pellets and hemp flowers supplied by Hempoint of Jhilava, Czech Republic. The brew, made of 60% hemp and 40% hops, is in bottles, which Srb says results in a serving price cheaper than if it came from a keg.