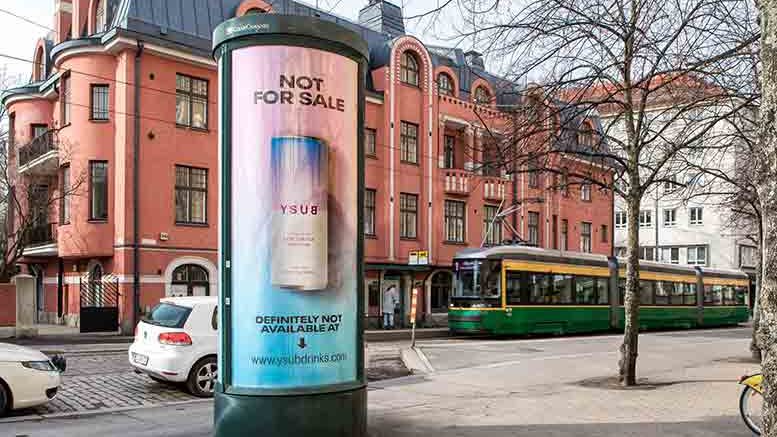 Finnish beverage maker YSUB has launched “Not for sale,” an advertising campaign on 54 street kiosks in Helsinki to encourage change in laws affecting sales of CBD in Nordic states.

“We wanted to spark the discussion and bring awareness around CBD and legal cannabis in general,” said Petri Nyländen, a co-founder at YSUB, which created the campaign in-house to fight stigma around legal cannabis, and to highlight the challenges companies face because of unclear laws.

“The use of CBD and hemp as wellness products, and the recreational use of cannabis are two completely different things. This is what we try to emphasize,” Nyländen said.

With sales and marketing of the company’s CBD beverages not allowed in the Nordics, YSUB’s campaign – with adspend value of roughly €40,000 – is being used to announce that very fact, noting on the posters that YSUB products are “Definitely not available at” the company’s website.

“We have the CBD beverage ready, but for regulatory reasons we cannot sell it in Finland or other Nordic countries,” Nyländen said, noting that YSUB’s home base of Finland and other Nordic states have yet to get up to speed after major developments at the EU level clarified rules for CBD late last year.

Other EU member states are in the process of adjusting national laws and regulations to align themselves with the European Commission’s clearance of CBD from drug status, its designation as a food, and EU free-trade guarantees. The European Court of Justice ruled late last year that CBD should not be considered a narcotic under the meaning of the 1961 UN Single Convention on narcotics, and that it may be freely traded across the European Union provided it is manufactured legally in the country of origin.

Veli-Pekka Pello, a lawyer and co-founder at YSUB, said Finnish medical authorities treat all CBD as prescription drugs, putting it in conflict with changes in the classification of CBD ushered in by the European Commission in December 2020.

YSUB is calling for common-sense legislation that would provide both consumer protection and clear rules for stakeholders. “It’s hard to navigate when the rules differ from country to country,” Pello said.

YSUB, which started up last year, said it has also suffered advertising bans by large internet companies. Facebook closed the company’s advertising account for using the hash tag #CBD in social media posts. Instagram closed YSUB’s account despite the fact that the company has not advertised or tried to sell products on that platform.

“As advertising in our main channel was made impossible, we decided to take a chance and get creative in a more traditional channel,” Nyländen said of the “Not for sale” campaign.