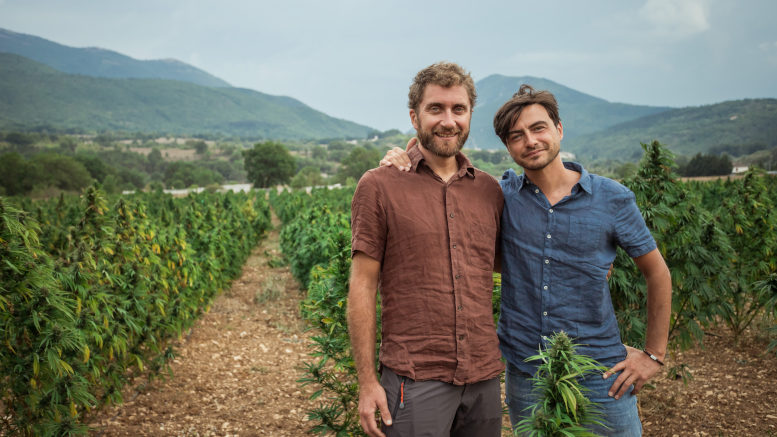 Jacopo Paolini and Marco Cappiello are co-founders of Enecta.

A new hemp variety from Italian-Dutch developer Enecta has been added to the EU catalog of common plant varieties, the first cultivar specifically bred for high cannabinoid content to appear on the official list.

Rich in cannabigerol (CBG), the new breed – named Enectarol – was developed through five years of research, said Jacopo Paolini, Enecta’s founder, and marks a key milestone in the company’s ongoing efforts to create a new generation of high-performing, high-cannabinoid European hemp strains to complement the fiber and seed varieties which dominate the EU catalog.

“There is a lack of true hemp flower strains for cannabinoids in Europe, as most of the varieties in the catalog are fiber-strain spin-offs,” Paolini said. “New genetics for the industry are evolving at an incredible pace, but the EU common catalog doesn’t mirror this evolution. The lack of new varieties is a pain point for the Euro hemp industry.”

CBG (cannabigerol), is one of 120 cannabinoids found in cannabis. While cannabis stakeholders have long been focused on developing THC and CBD, researchers and hemp breeders are now teaming up to better understand CBG, and developing CBG-rich cultivars.

CBG is known as the “mother” or “OG” cannabinoid, due to the fact that it is the precursor to CBD (Cannabidiol), CBN (Cannabinol), CBC (Cannabichromene), and THCA (Tetrahydrocannabinolic Acid).

CBG activates both CB1 and CB2 receptors in the endocannabinoid system, offering the promise that it could hold the cumulative qualities of all other cannabinoids put together.

Studies have shown that taken internally, CBG shows promise as a therapeutic for such afflictions as glaucoma, inflammatory bowel disease and Huntington’s disease, and may inhibit tumor growth in some cases; it is known to kill or slow bacteria and advance bone development.

The European Commission last year added CBG to the EU’s cosmetic ingredient database (Cosing), clearing the compound as safe for use in health & beauty products. As a topical, CBG works with the CB1 and CB2 endocannabinoid receptors, which are located in the skin. Proponents say the hemp-derived compound has anti-inflammatory, antibacterial, and antioxidant properties that help the endocannabinoid system maintain healthy skin function.

Recent trials of Enectarol in Italy showed the variety producing 5.5% CBG and less than 0.1% THC, half the limit under current EU rules for THC content. (The EU THC limit will rise to 0.3% under a change that takes effect next year).

Meanwhile, Enecta has also developed Enectaliana, a high CBD strain the company has also submitted to the EU plant catalog, with expectations it will be approved in the coming months. That variety expresses up to 10% CBD at less than 0.2% THC.

Both Enecta varieties are proven to have a germination rate of roughly 95%, well beyond the EU requirement of 70-80%. Photosensitive, as contrasted with auto-flowering varieties, Enectarol and Enectialiana have proven strong performers in areas ranging from Greece to Lithuania, producing bountiful biomass outputs while reducing seed production and stalk waste.

In order to qualify for the official EU plant list, new varieties must undergo a number of scientific tests which show they produce uniform and stable plants. For growers, planting approved cultivars is not only a guarantee of plant quality but a prerequisite to receiving direct EU agriculture subsidies, a critical factor in farming decision-making.

Such tests and standards under certification are critical to the overall hemp industry, contributing to transparency, which is still lacking at many levels of the hemp supply chain, Paolini said.

“It’s no mystery that it is still hard for consumers and growers to figure out what they are really buying or planting,” Paolini said. “That is crucial when you are planting, say, a high CBD variety and, due to poor genetic stability, the plants don’t produce what you were hoping for. We need such new-generation hemp seeds to turn the CBD industry around.”

“It’s called ‘supply chain’ for a reason; quality is passed on from one link to another. A more holistic approach is the only one that is going to be future-proof,” he added.

Enecta has more than 10 years of experience in the hemp and CBD industries, and partners with leading researchers such as Giesen Research Group, Holland, and Berlin-based Becanex, a well-regarded extractor that supplies the food and cosmetics sectors.

In addition to its genetics division, Enecta is a producer and seller of high-concentration cannabinoid products for the medical, pharmaceutical and nutraceutical industries. Founded in Holland in 2012, Enecta is based in Bologna, Italy.