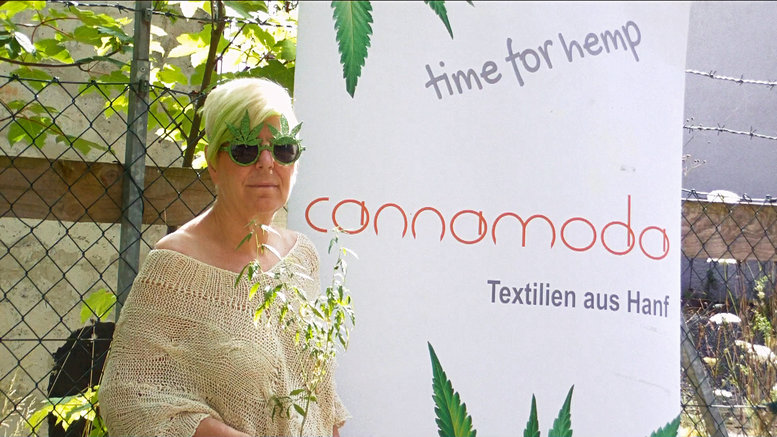 With interest in hemp fashions and accessories gradually growing among eco-conscious consumers, German firm Cannamoda is working toward a future in which raw material can be more broadly sourced closer to the company’s Sachsenheim, Germany operations near Stuttgart.

”We recently took delivery of a 50% hemp, 50% cotton material based on German-grown hemp,” said Petra Rusch, manager of Cannamoda, a designer, producer and seller of a constantly evolving range of hemp fashions and accessories. The company turns out hand-made, high-quality hemp lingerie, menswear, womenswear, t-shirts, children’s clothing and accessories. The 50/50 blend was created following development earlier this year of a 30% hemp, 70% cotton yarn for weaving jeans, Rusch said.

Even across the whole of Europe, hemp production for textiles barely registers in the European Industrial Hemp Association’s breakdown of the continent’s hemp production, with the majority of such materials being imported from China.

“There are some small hemp growing operations for textiles in northern Germany and the University of Reutlingen is studying hemp textiles,” Rusch said of Germany, “but it was only recently that domestic production of such products was possible.”

She sees a more close-to-home supply helping to align hemp-made fashions price-wise versus those made from more traditional materials, especially considering the value proposition hemp textiles provide – its comfort, durability and eco-friendliness.

One of the highlights of Cannamoda’s portfolio is a hot line of hemp lingerie, with prices ranging from a modest €25 to €40. Rusch said those prices – still above those for traditional intimate fashions – are due mainly to the relative high price of hemp raw materials and the fact that some partwork, such as lace, must undergo certification.

While Rusch first got started in hemp clothing design in the 1990s with moderate success selling a children’s line, “that all collapsed around 2000,” she said. But with the re-emergence of industrial hemp she sees the market coming back to life. She restarted in the business in 2014 with the launch of Cannamoda.

“Now’s the right time to start again,” said Rusch, who taught school after her first hemp business dried up, but who’s now back on the fashion trade fair and exhibition circuit with her Cannamoda-designed clothing line. “The reactions are different now. People still don’t know much about hemp materials, but they are willing to listen.”

Along with what Rusch sees as better timing, Cannamoda is also running a crowdfunding campaign to put money in the company’s coffers for continuing development.

Rusch’s design skills were developed as a child. “My mother started to teach me to sew when I was 8 years old,” Rusch said, “and I always liked making things with my hands.” She first got interested in hemp clothing when a friend brought her a bolt of the material and asked her to fashion him a pair of jeans.

From there, she began to fashion a children’s clothing line and started wholesale marketing at Frankfurt trade fairs – jumping into the market much too early, she admitted.

“It was all too new and exotic, and hemp’s connection to marijuana was always something that held the products back,” she said of those early days in the business, when “so much institutional knowledge about hemp had been lost.”

While Cannamoda still has to import some hemp yarn from Italy, Rusch produces all of the company’s textiles on specialized German machines in a factory near Stuttgart. “We’ve developed the process to eventually make 100% hemp material,” she said of the production tests.

For now, Cannamoda’s sales are through the company’s online shop while Rusch looks to build out a retail network. It’s all with two key factors in mind, Rusch said. “We need intelligent and authentic solutions that allow us to achieve commercial objectives while at the same time acting in a responsible, sustainable way,” she said.