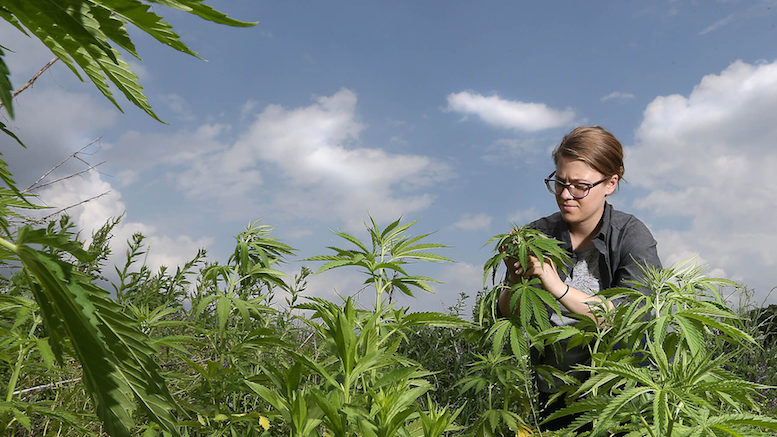 INTERVIEW: Marguerite Bolt has been hemp extension specialist at Purdue University since 2019, when the position was created to help Purdue take an active role in advancing the hemp industry across the state of Indiana. Bolt, who grew up chasing bugs on a farm in northern Michigan, earned a bachelor of science degree in entomology from Michigan State University (MSU), where she also served as a research assistant in the school’s Landis Lab and as a field technician in the university’s Extension program. She earned a master’s degree in entomology at Purdue before taking up her current position. Bolt represents Purdue in the Midwest Hemp Database, an initiative in which researchers from several U.S. farm-state universities are cooperating on hemp studies focused on cannabinoids.

HempToday: What’s the scope of your role as a Purdue extension specialist?

Marguerite Bolt: I serve as a link between the university, growers, industry people, and regulators. I spend a lot of my time answering questions and presenting information to growers. I also partake in various research projects.

HT: How is Indiana hemp holding up in the midst of the CBD crash? How would you characterize the effect of the glut on the state’s hemp sector?

MB: Like most states, we have seen a downturn in production. Indiana didn’t have the sheer number of acres like many other states, so it didn’t hurt as many growers and industry members as it did in Kentucky. I have tried to help growers make realistic decisions and not bet the farm.

HT: One of the myths about hemp is that it is unaffected by insects. There are clear examples now that this is not true. What have you found in your study of how hemp and insects interact?

MB: That is true, a lot of different insects and mites attack the hemp plant and can do a lot of damage. I have seen Eurasian hemp borer cause damage at commercial farms and it is difficult to detect early in the season. It is also interesting to see pests like corn earworm and fall armyworm—generalists that feed on many different host plants—feed extensively on the plants.

HT: What can you say about the hemp growing trials that have been carried out at Purdue? Which varieties look adaptable to Indiana growing conditions? And where do those varieties originate?

MB: Several different grain and fiber trials have been conducted at Purdue over the years and European cultivars from Italy and France do well here. We have seen a cultivar from China do well, but the THC content was above the 0.3% threshold.

HT: Can you tell us anything about the history of hemp in Indiana. Did Indiana farmers grow it as some other Midwest states did in the 19th and first half of the 20th century?

MB: Indiana was a hemp-growing state in the 19th and beginning of the 20th century like all the other Midwestern states. There were hemp farms across the state, but the majority of the feral hemp found is in the Northwest part of Indiana.

HT: Is hemp in the curricula of any other courses of study at Purdue? Is there cross-disciplinary activity among the College of Agriculture and other academic departments?

MB: There isn’t a specific hemp curriculum for undergraduates, but faculty that work on hemp do integrate the plant into their teaching. We have created a non-credit hemp course through Purdue Online. I have worked or spoken with a number of students that have chosen to focus on hemp for class projects. There are a number of graduate students across multiple disciplines that have hemp researchers.

HT: What is hemp competing with among Indiana farmers? What’s the general makeup of farm outputs in Indiana in 2022?

MB: I would say hemp is not competing much with our traditional corn or soybean plantings considering hemp acreage in Indiana is low. We do have some row crop farmers that have integrated hemp into their rotations, but on a small scale. Many of our hemp farmers are beginning farmers or farmers that had some fallow land they wanted to convert back into cropland.

HT: With the state’s hemp program now fully operational under USDA approval, what are the key challenges to expanding Indiana hemp fields?

MB: Developing the supply chain, which I think everyone in the industry would agree on right now. I don’t want to see mass amounts of growers jump in without a place to sell their crop. Many of our current growers are making their own products or found a processor early on. On the production side, we still have a lot to learn about growing a high-yielding crop and sourcing ideal genetics.

HT: How do rate the support from state government? What else can the state do to advance the industrial hemp sector?

MB: Certain people within the state government and regulatory bodies have been supporters and have helped to move the industry forward. We still have a long way to go to gain full support though. I think many are familiar with the smokable hemp ban in the state. There is still a lot of misinformation about the hemp plant, it would be great if more people in government would attend hemp events and farms to learn more about the crop and the people producing it.

HT: What are the commercial opportunities for hemp in Indiana industry?

MB: Like many states, there was a huge focus on the CBD market but many growers are interested in grain and fiber production. There are several people working to bring fiber processing to Indiana. If animal feed were to get approved for poultry, that could be huge in the state. Indiana is one of the largest poultry-producing states.