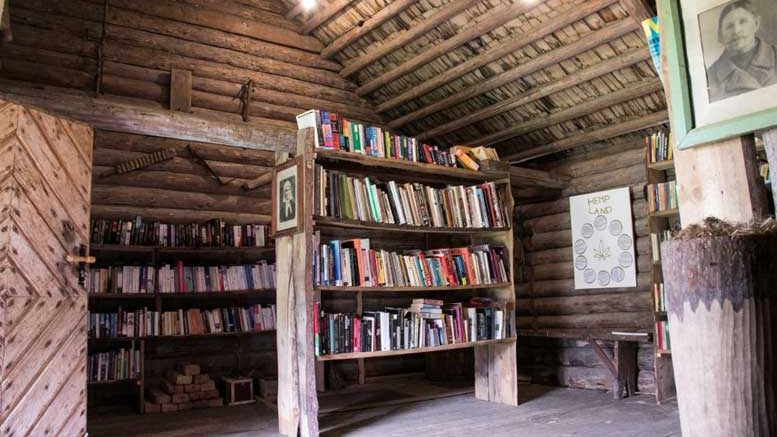 The library at Obelisk farm

Obelisk Farm in eastern Latvia is undertaking plans to add a hemp museum to its small hemp farming and education complex.

“Hemp has long been part of Latvian history and culture,” said Obelisk co-founder Debora Paulino. She and her husband Andris Visnevskis founded Obelisk Farm in 2013

“The idea is relatively new. We knew we wanted to make something in the library barn, apart from having books sitting there, but we didn’t have a specific idea,” said Paulino. “We got inspired by the Dublin Hemp Museum’s work.”

The couple say the museum will not only showcase the history of hemp in Latvia but also highlight hemp culture from other countries.

Paulino, Visnevskis and their two children live on the 2.5-hectare farm complex, which includes an old farmhouse and several stone and wooden outbuildings. Alongside selling a number of food products, Obelisk Farm also offers educational tours and hosts a series of annual hemp workshops.

Visnevskis and Paulino revealed their museum plans during the recent Hemp 2020 Business Summit in Poland organized by HempToday. The summit was the last stop on a European wide trip which also saw the family attend the 8th International Hemp Building Association in Brussels. IHBA founder Steve Allin previously visited Obelisk Farm in 2017 when he hosted a hemp building workshop.

Obelisk farm was visited by more than 1,000 people last year and the addition of a museum should be a welcomed attraction. “The tourism offer we have at the moment will be enriched by the museum,” said Paulino. “And we hope the high number of visitors we have been receiving will continue to grow with this great addition to our offer.”

Plans are still at an early stage; the couple are currently sourcing items to display. “We plan to contact local, regional and national organizations that might be able to help. We also hope to develop some cooperation with universities and researchers.” Paulino said. “We have reached out to our social network and already found some material this way.”

To support the endeavor the couple have created a crowd-funding campaign to raise €600** to fund such things as display and storage systems, information panels, and lighting.

Once launched it will join the small list of hemp museums across the world. Currently museums exists in Ireland, the Netherlands, Germany, Italy, Spain, Japan and Uruguay.