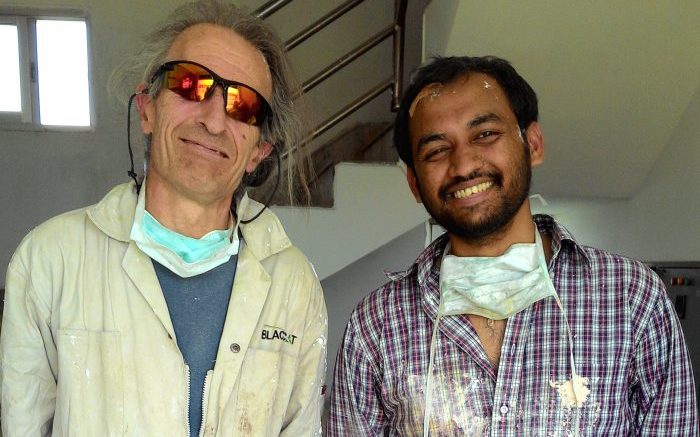 Steve Allin pioneered the International Hemp Building Association (IHBA), which he serves as director. An author, teacher and consultant on ecological building, Steve has been building with hemp and promoting hemp’s use in construction all over the world for the last 20 years. He is currently involved in projects to rebuild with hemp in the post-earthquake areas of Haiti and Nepal, while maintaining a busy workshop and speaking schedule. Steve lives in Rusheens, Kenmare, County Kerry, Ireland.

HT: How did you get involved in the Haiti project?
SA: I met Ritva Laurila as a participant on the first Hemp Building Course I taught in Finland in 2013. She spent many years living in Haiti in the 80’s and 90’s  after she qualified as an architect and has a daughter who is half Haitian. She asked me whether I would consider travelling to Haiti to help establish the system there to alleviate the situation resulting from the earthquake in 2010. It just so happened that I had previously written a piece in an IHBA newsletter about the earthquake in Haiti and how hempcrete would have been a safer option and could be so, in the future.

HT: What did you find when you got there?
SA: I knew nothing about Haiti then and so was largely unprepared for what I would experience. When Ritva invited me it was as part of the research for a project she was proposing to the Finnish government aid fund working with the Haitian Resource Development Association, which is directed by her friend Jacques Bartoli. My first visit was really to see what was possible and how we would go about putting Ritvas plan into action. I had no emotional connection to place initially, having virtually no knowledge of the country’s history. Apart from the fact it was part of Hispaniola, the island “discovered” by the slave trader Christopher Columbus and where he perpetrated genocide on the native population. It was by reading the novel by Isabel Allende “The Island under the Sea” that I eventually understood the national history and culture. Another book, “Fault Lines” by Beverly Bell brought me up to date on the situation in the country since the earthquake (2010) — the shock to the populace, the damaging results of U.S. intervention and the “invasion” by the forces of the U.N. Haiti is one of the poorest countries in the western hemisphere and though I have experienced poverty on a large scale in India, that’s nothing compared to the situation in Haiti today.

HT: What are the goals of the project?
SA: Our project is based on the concept of establishing a mobile school centered around the growing and processing of hemp — initially to build with, and then to develop other materials such as fibre and food once we have a supply from the agricultural side. We are training a core group in the basic skills involved with designing and building small houses for people in a variety of regions in the country. So far, we’ve identified our core group, begun the construction training and planted the first crops.

HT: And the project in Nepal?
SA: In Nepal the situation was quite different. Dhiraj Shah (Shah Hemp Inno-Ventures — SHIV) came to me via the internet as part of his research into repairing Nepal after the more recent earthquake (2014). Having returned from Portugal with his wife Nivedita as a reaction the the earthquake, Dhiraj wanted to bring an ecological and sustainable solution to the process of rebuilding the hundreds of thousands of homes destroyed in the quake. Having discovered the idea of building with hemp and that it might be an earthquake proof system, and then finding me, Dhiraj quite quickly identified how the wild hemp growing throughout the Himalayas might be processed and used to make hempcrete.

HT: Where does the project stand now?
SA: Dhiraj got me out to Nepal in February and we started work on a couple of his projects. The first one is to use the material locally to repair the homes of villagers in the remote mountainous regions where people are still living in fear of more quakes, and as a result are sleeping in tents and building makeshift shacks from rescued materials from their former homes to cook and shelter in during the day.

HT: What are the logistical challenges in this situation?
SA: This idea will have to be well thought out as the terrain in the north of the country where the earthquake hit the hardest makes it very difficult to transport materials around — across and up and down! But the need is great across a large region there.

HT: Tell us about the other project with SHIV.
SA: This has implications for the new build sector in Nepal. It’s based around the family home base of Janakpur in the south of the country. Here, Dhiraj’s father, Dr. Ram K. Shah, has his trauma surgery practice, and is in the process of building a new hospital on the outskirts of the city. The main structure is already completed but we are incorporating hempcrete into the building of the waiting area and 4 accommodation rooms for staff. In conjunction with plans for solar panels on the roof to reduce energy costs, we will also incorporate other “green” materials for shading to further reduce energy needs — especially for cooling.

HT: If we look at development of materials for hemp-lime building, how do you see the market shaping up?
SA: Naturally all of us involved in the this industry would like to see growth in the use and uptake of hempcrete, but of course this cannot happen fast for several reasons — the primary one being that there is still no hemp supply in many countries. Where there is a supply the production of hurds is largely as a result of the fibre production for bio-composites, with hurds being the by-product.

HT: How to get past that situation where hemp building is in the back seat?
SA: Hemp construction is the type of sector that could expand quickly if several large projects were to happen simultaneously; however we would still be limited by the present production of any particular year’s yield. More widespread use of hempcrete or hemp fibre insulation will need action on both fronts, that of supply and projects. We need both the chicken and the egg at the same time.

HT: What are the other challenges to expansion of the hemp building sector?
SA: Transportation. Within Europe there is a dense population living in a large area which provides a well connected market. This makes it economical, so far, to transport lightweight materials such as hemp hurds several hundred miles. But in regions such as the American or Australasian continents it is another matter. The massive distances between farmers and markets makes it hard to offer an affordable system. In many cases we have to start out with more expensive iconic projects that are financed by those lucky enough to pay for the notoriety of being first — to be able to produce the right promotion

HT: And more broadly, looking forward, how do you see hemp building’s potential?
SA: Eventually we need to house more affordably the more needy in our communities, or just the “Joe Soaps.” For that we need to make the system cheaper with simplification and the use of very locally supplied materials.

HT: But isn’t it all ultimately destined to be just another big business?
SA: I think the best model is the one of Community Supported Agriculture (CSA) where a local builder plans his projects a year or so ahead and makes deals with local farmers to supply the hemp on an annual basis. This method has so many advantages and can be built around an inexpensive collection of tools and machinery. This is what we envisage in both Haiti and Nepal.

HT: Since you’re everybody else’s guru now, who were yours? (hemp building)
SA: I would like to think I was everyone’s guru but that’s not really the case. The people who I learnt most from by seeing their work were Laurent Goudet who invented the concept of spraying hempcrete, and Charles Colgnard, a skilled hemp plasterer, both of whom live and work in Brittany, France. I had the pleasure of meeting Yves Khun shortly before he died when he came to give a presentation at the 3rd International Hemp Building Symposium in Yverdon les Bain, Switzerland in 2012. As one of the originators, it was he who really showed the world how beautiful a building could be made with hempcrete. He was also very aware of the holistic effects of using such a material and living around it.

HT: Which do you enjoy more: building or teaching?
SA: I still love building with hemp but the feedback I get from teaching is very rewarding. The physical demands of working and building leave me aching at the end of the day as I get older.

HT: Aside from building, what are your other interests?
SA: Two things: My family and friends, and music. The more I travel teaching, the more I value where I live and my beautiful family.

HT: What do you read?
SA: I love getting lost in a book whether a novel or a more serious subject which intrigues me but recently I have been focusing on rock ‘n roll biographies such as those of John Lydon, Robert Plant and Chrissie Hynde. I am currently reading a book by a guy named Roger Rea who was a Swiss hippy bus driver on the Road East from Europe to Goa and back.

HT: Speaking of musicians, of all those who died in early 2016, who’s the biggest loss and why?
SA: David Bowie even though I was a fan of Lemmy from when I saw him in Hawkwind back in 1973 and as a D.J. in Goa in the 80’s. Prince was a godsend. Just with the opening few bars of one of his songs, the dance floor would fill up with all the young and older ladies. The residents of the squat I first lived when I left home were all huge Bowie fans from the days when there were only a few hundred of them crammed into a small upstairs room in a pub in London somewhere. Throughout his career he pushed the boundaries and it was always music from the edge that attracted me about rock ‘n roll in the first place. I was never lucky enough to see him perform but I felt a huge loss when I learnt about his passing — in the same way I did when John Lennon and John Peel (famous British radio D.J.) died. The fact that Bowie was also a great guy increases the feeling.

HT: How did you first get into hemp?
SA: Before I returned to live in Ireland the publication of “The Emperor Wears No Clothes” was creating quite a stir. The inclusion of the information about IsoChanvre in a later edition coincided with me building my own house, and so I imported some to use as a plaster. And thereby hangs a tale.

HT: Did you ever do anything illegal regarding cannabis?
SA: Inhaled!!??

HT: What makes you angry?
SA: Greed and cruelty.