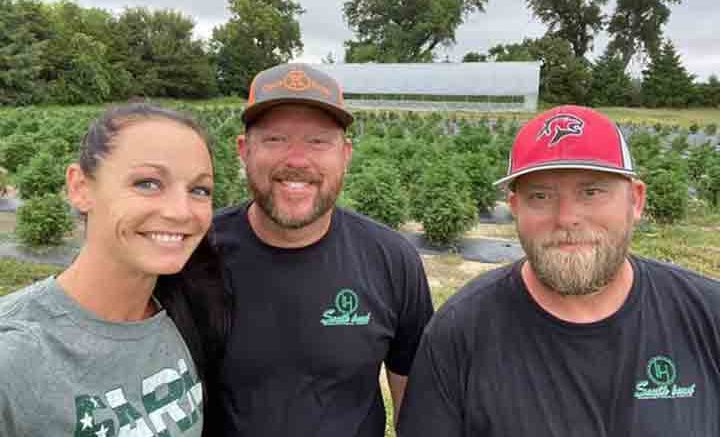 A Kansas, USA hemp company says it will bring a new decortication factory online in March, with plans to process stalks from up to 2,000 acres of nearby fields this year.

If the company, South Bend IndustrialHemp (SBIH), reaches that goal, it would more than double the 1,758 acres of hemp planted in the state two years ago – the first year hemp planting resumed in Kansas, and the latest year for which figures are available from the state.

Melissa Nelson-Baldwin, a co-founder of SBIH, said her company is already taking orders, primarily from resellers of animal bedding. But the company anticipates growing demand for hurd for hempcrete and fiber-based insulation for the construction industry. Bio-plastics for prosthetics, and paper are also promising markets, Nelson-Baldwin said.

SBIH is also working with the Hemp Feed Coalition, a national trade group advancing hemp as animal feed, and is in discussions on grain deals it can execute through existing sales channels for hulled hemp seed as human food.

Kansas counted nearly $4.5 million in returns from a yield of 832,950 lbs. of hemp – overwhelmingly flowers — in 2019, according to a state hemp report published last year about the 2019 growing season.

The state report focused primarily on production of hemp flowers for CBD, the predominant output by the state’s farmers in 2019. Hemp flowers were grown on 1,334 acres in 2019, but yields were relatively light at 467 lbs per acre, leading to total “negative returns” of $13 million for flowers and grain combined. Only 421 acres went under hemp grain varieties in Kansas in 2019, bringing in an average 500 lbs. per acre. “According to our consultant, successful yields would be closer to 1,200 pounds per acre for hemp grain and about 3,300 pounds per acre for floral hemp,” the report noted.

About $17 million in returns from hemp seedlings left the state’s hemp industry with a positive balance of about $4.5 million in 2019. Fiber production was too small to generate figures, the state noted.

South Bend Industrial Hemp wants to change that. While the company first jumped into hemp in 2019 amid the CBD craze, Nelson-Baldwin said the long-term hemp vision embraced fiber and grain from the start. The company grew 80 acres of dryland fiber/grain hemp that first year, and started up CBD operations, creating a line of branded products: honey, salves and lotions, focusing on quality and emphasizing craft production.

“We’ve been focused on fiber and grain since the beginning but used CBD as a form of cash flow, client research and for educational purposes,” Nelson-Baldwin said.

As Kansas moves into its first year of commercial hemp growing, SBIH’s two years of experience has the company well positioned. SBIH grew 1,500 CBD plants and farmed 55 acres of irrigated fiber and grain varieties in 2020. Left in the lurch when a bulk CBD deal failed to materialize after last year’s harvest, Nelson-Baldwin said the company looked more deeply into hemp stalk processing, arrived at promising numbers and decided the moment was right to kickstart a fiber supply chain.

Getting local farmers to grow hemp for fiber comes down to economics, Nelson-Baldwin said. For instance, the state estimates that hemp grain could bring as much as $400 per acre, with hemp grown for fiber estimated at $150 per acre. That compares favorably to common Kansas crops such as sorghum, which brings $40 per acre; corn, at $35 per acre; and soybeans, at $2 per acre, Nelson-Baldwin noted.

Fourth-generation farmers based in Great Bend, Kansas, SBIH is owned by Nelson-Baldwin, her husband Aaron Baldwin, and his brother, Richard. The company self-funded operations for two years before turning to a local bank to finance its expansion into fiber operations this year. At the heart of that facility, and the key investment, will be a Fiber Track 660 decortication line from Formation Ag, a Colorado-based farm machine specialist.

This year is the first year for fully open commercial growing and processing of hemp in Kansas, which is under the state’s Department of Agriculture.

Kansas licensed 207 growers and 23 processors for last year’s season. State officials in December said they expect about the same number of applicants for industrial hemp licenses in 2021.

The state estimated in last year’s hemp sector report that the annual value of the crop in Kansas could eventually rise to $22 million.