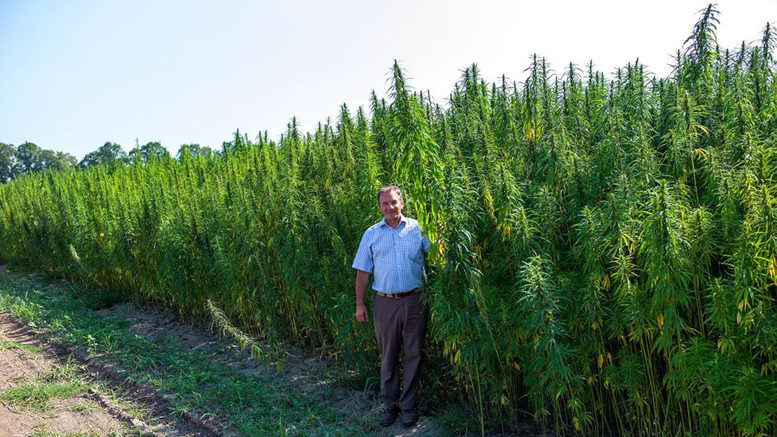 Michel Terestchenko, Mayor of the Ukranian city of Hlukhiv, sees hemp as a potential engine of economic growth for the Sumy region, a traditional hemp farming area.

Targeting a growing number of worldwide export markets, the Ukrainian hemp industry is gradually increasing output, with more than 4,000 hectares planted this year, according to the Ukrainian Hemp Association. But to keep expanding, Ukraine needs the machinery and factories to process ever larger yields, industry observers say.

Last year Ukrainian farmers planted a total 3,400 ha. in hemp. While 2,800 of those were planted for seed production, the remaining 600 were grown primarily for fiber, according to the Association. Those figures put hemp output at nearly triple earlier reports which estimated Ukrainian fields at 890 hectares in 2016.

A need for co-financing and technology transfer

“Production of hemp in Ukraine is increasing, as is the export of unprocessed hemp seeds and fiber,” said Alexander Prokayev, owner and director at Agroritet Agribusiness Solutions in Dnipro (the Ukrainian city was recently renamed from it’s original Dnipropetrovsk).

But to better position itself in the global industrial hemp market, “Ukraine needs both co-financing and high-quality technology transfer from partners both domestic and global,” Prokayev said.

While most hemp coming out of Ukraine is destined for the European markets, contracts are already in place with buyers in the United States, Uruguay and Paraguay, according to Oleksiy Pavlenko, a former Ukrainian Minister of Agrarian Policy who works with the hemp industry. Negotiations over export contracts are in the final stages for deals in Iran, China, the Baltic States, Chile, Italy and Colombia, he added.

The recent success of Canadian producers in the South Korea also has gotten the attention of Ukrainian hemp interests, which have started exploring that and other ASEAN markets where the demand for foods rich in Omega 3 and 6 is surging.

Meanwhile on the domestic market, a number of processors and producers of hemp products is growing. Those firms are making everything from food to rope and textiles.

Ukraine has a rich history in cannabis science, mainly based on the work of the Ukrainian Institute of Cannabis Seeds (UICS) and the Institute of Bast Crops (IBC) that dates to 1932. “Ukrainian scientists have made a significant contribution to the development of seed science and created many hemp varieties,” said Pavlenko. “That ensures the growth of the industry, and the agriculture ministry fully supports them,” he added.

IBC is one of the world’s largest centers for developing new hemp varieties, focusing on improving fiber quality, yields, and diminishing THC content. In 2009 it created the world’s first non-narcotic varieties of hemp; and before that, the first varieties with insignificant amounts of THC.

Located in the the city of Hlukhiv in a traditional hemp farming area of the Sumy region, IBC also works with local municipal authorities on hemp initiatives. The city’s Mayor, Michel Terestchenko has plans to build a hemp healing center as part of an effort to re-center the local economy – at least in part – around hemp. The center is to be located in what was once the residence of Mykhailo Terestchenko, Mayor Terestchenko’s father and a Ukrainian industrial magnate and philanthropist who lost everything after the Bolshevik revolution of 1917.

Shackles are off the industry

All the activity in the Ukraine is helped along by a compliant approach to hemp farming and processing. While farmers need a license, permission is easy to obtain, with officials essentially treating hemp like any other crop.
That leaves the shackles off Ukrainian hemp industry advocates who are determined to stake their claim in the growing international market.

“Just imagine,” said Pavlenko, “Ukrainian cannabis seeds are now being sown and processed on both sides of the ocean.”