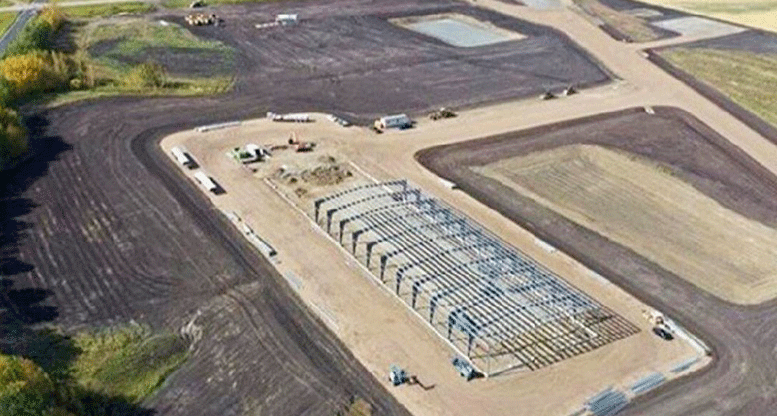 Canadian Rockies Hemp Corporation (CRHC) said it has resumed construction on an industrial scale fiber hemp processing facility after a nine-month hiatus caused by financing delays. The company said private equity firm Merida Capital Holdings has invested $14 million (CAD$18 million) in cash and debt equity that will let the company get the project back on track.

CRHC said the processing complex, located in the town of Bruderheim, near Edmonton, Alberta, could be finished as early as this summer. Construction started in autumn 2019, but was stopped when CRHC’s original financing plan fell through.

Aaron Barr, the company’s CEO and chief horticulturalist, said CRHC met banking conditions late last year, clearing the way for the financing and allowing construction to resume. Work on the 60,000-square-foot facility, being built to process hemp for fiber, hurd and dust products, is about half complete, Barr said.

“We have a unique opportunity here in Alberta, due to our really dry climate,” Barr told Alberta Farmer. “Most hemp fiber processors have to store all of their materials indoors to prevent their bales from rotting. We don’t have to do that. We can do all outdoor storage of our bales.” Barr said CRHC can leave raw baled hemp outdoors for two to four years without the material decaying.

Production capacity of the facility is expected to reach up to 50,000 tons of fiber and 110,000 tons of hurd each year, requiring 50,000 acres of hemp fields, the company said. CRHC said it sees the biggest market for hurd in animal bedding, and that it already has contracts to supply high-end horse facilities in the United States and Canada.

CRHC contracts local growers within a 500 mile radius from Bruderheim, north of Edmonton, to grow the hemp, and provides optional harvesting services. The company had agreements with about 50 growers in 2020; fewer growers were signed up this year, but they represent greater overall acreage, Barr said.

“The industrial hemp industry is just being developed in North America, and the opportunity is massive, with demand from various industries across the globe,” Mina Mishrikey of Merida Capital, which specializes in cannabis and hemp investments, said in a release. “Today, there are many holes in the North American value chain, in particular the processing of raw materials.”