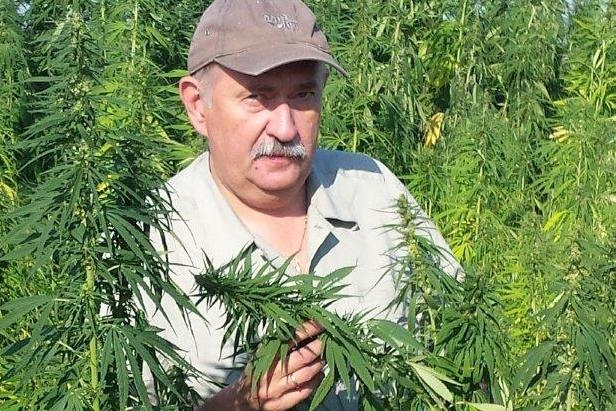 Jerzy Mańkowski is a researcher at Poland’s Institute of Natural Fibres and Medicinal Plants (IWNiRZ), where he leads research on cultivation and processing of flax and hemp. He is also researching hemp as a solution for reclamation of land polluted by industry. Jerzy is a member of the Polish Chamber of Flax and Hemp, which supports farmers, producers and processors of these crops in Poland.

HempToday: What did the Polish hemp crop look like this year?
Jerzy Mańkowski: We estimate that about 1,000 ha was devoted to hemp this year, a considerable increase comparing to 2014 when the total was about 300 ha.

HT: Why such a big jump?
JM: The main reason was EU subsidies for farmers growing hemp that became available at the beginning of the the year under the “greening directive.” Hemp is only one of the crops covered under the directive, but there’s also real and growing interest in the use of such renewable raw materials for industrial applications, same as it is in the western countries of the EU.

HT: What’s the scope of your Institute’s activities in hemp?
JM: Our Institute is the main breeder of hemp and producer of certified seeds from five hemp cultivars in Poland. Our strains are Białobrzeskie, Beniko, Tygra, Rajan and Wojko. It puts us in a position to feel first-hand the interest of farmers in sowing hemp not only in Poland but also abroad. We see the demand growing on both accounts.

HT: And the scope of the Polish hemp seed market?
JM: The most popular Polish cultivars are Białobrzeskie and Beniko. Cultivars bred in other countries are also being grown in Poland, the result of a domestic shortage of seeds for sowing. This is because the demand for seeds in Poland couldn’t be met based on the level of Polish cultivars that are now being harvested. The seeds of these cultivars were purchased from foreign suppliers. According to legislation in force, all cultivars from the EU Common Catalogue can be grown in Poland.

HT: What will IWNiRZ be doing with the hemp seed it has contracted to purchase?
JM: We sell it to farmers interested in growing hemp. The range of research is not directly connected with the amount of contracted hemp, but it reflects our statutory obligations in this field.

HT: What is the Institute’s range of other research and activities?
JM: Overall, our work ranges through plant biodiversity, fibrous and medicinal plants, new technologies for cultivation and plant protection, processing technologies and end-user products that are eco-friendly and healthy. We’re also looking at using biomass and waste products from fibrous, medicinal and energy plants to produce renewable energy; and we’re studying bio-polymers, textiles and building materials made from natural fibres.

HT: How do you see the potential for hemp farming and processing and the markets generally for hemp products in Poland? Do you anticipate that there will be growth markets in export?
JM: In light of recent developments it seems that both the hemp cultivation and hemp processing sectors will grow, which is an indicator that demand for hemp-derived products also grows. That demand, along with subsidies, will help sustain the current growth trend both domestically and for export.

HT: How suitable are Polish lands for hemp farming? Are the soils better in any particular region?
JM: Soils in Poland are highly differentiated in terms of quality. Generally the best soils for hemp cultivation can be found in southwestern and southeastern Poland. But many other parts of Poland also have soils suitable for hemp cultivation. To some extent, any soil unsuitability can be compensated for by properly managed agronomic regimes. It is also very important to understand that weather conditions matter a great deal, especially when growing hemp for seeds. For example, seed production is not recommended in northeastern Poland.

HT: Do you see the general structure of Polish farming economics as any kind of barrier to developing the hemp industry? We ask mainly in light of the fact that there are so many small farms?
JM: Certainly, the highly fragmented fields and relatively small average size of farms in Poland are barriers to some extent. It is well known that bigger farms usually contribute to better economics in the agro industry. However, these limitations not have to be barriers; just look at Italy as an example.

HT: Could you tell us a bit about the history of the hemp industries in Poland?
JM: Between WW I and WW II, even up through the early 1960s, hemp was a commonly used raw material for textiles. The cultivation area in Poland at that time covered about 30,000 ha. After WW II hemp was replaced in many cases by synthetic fibres and imported cheap natural fibres — jute and sisal for example. This caused a drastic reduction in demand for hemp and ultimately the decline of the hemp processing industry in Poland.

HT: Are EU farm and rural economic development programs really suitable for hemp farming? It would seem that practitioners in the “renewed” hemp industry would need a lot of flexibility in the startup phase but that EU programs generally don’t allow for such flexibility — i.e. adjustments to business plans, etc.?
JM: The available EU programmes are meant to contribute to development and modernization of farms and the agro industries — and that’s good. However, they should be more flexible and adaptable to the needs of companies processing hemp.