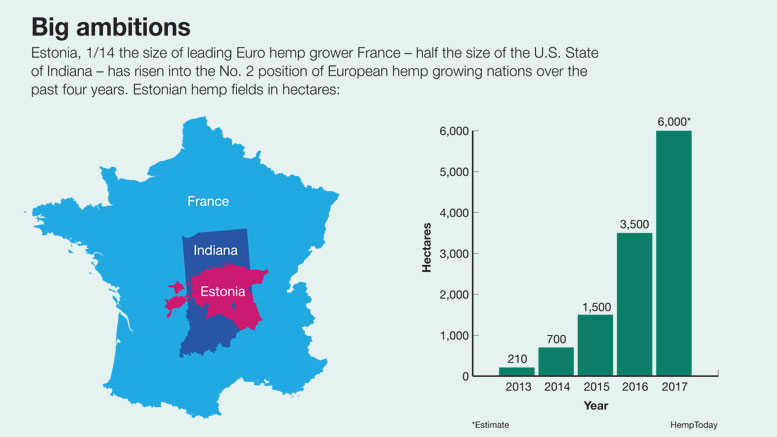 Fueled by a growing European demand for hemp seeds, tiny Estonia in the EU’s Baltic region has rapidly emerged to become the continent’s second biggest hemp grower behind France. After cultivating 3,500 ha in 2016, preliminary estimates are that Estonian farmers this year have planted roughly 6,000 ha.

While that finds Estonia a distant second to France (14,500 ha in 2016), it puts the nation, population just 1.3 million (think Dallas or Brussels) above its much bigger European hemp brethren, such as Italy (2,300 ha) and Germany (1,500 ha), according to figures from the European Industrial Hemp Association.

“Farmers are starting to become aware of the benefits of hemp growing and the know-how is getting better,” said Margus Kesa, Export Manager at Tiigikalda OÜ, an agro firm that this spring planted hemp on 3,000 ha – one half of the company’s total hectarage; with 6,000 ha total land, Tiigikalda is one of Estonia’s biggest organic farming firms.

Tiigikalda recorded a yield of 800 tons of hemp grain from 1,200 ha planted last year in Finola, Europe’s leading oilseed hemp variety, making it the biggest hemp grower in Estonia, according to Kesa.

The overall growth in Estonian hemp fields is to fuel demand for hemp seed mostly from Europe, Kesa said, with the Estonian hemp-ag industry anchored mainly among a few big farming concerns who grow on an industrial basis (100s of hectares). “The fact that there is demand for high quality seeds at a good price makes hemp growing attractive to Estonian farmers,” he added.

“We still have a lot to do about working together and finding the best solutions for export,” Kesa said. “As in all of agriculture, it’s more valuable to sell products that have a higher level of processing.” In that vein, Tiigikalda together with some other big farmers are thinking of ways to raise the level of processing of its seeds, boost yield and improve the quality of its exports.

“It all starts with farming techniques and know-how, and how we handle the harvested seeds and how we process it,” he said.

While the bigger firms are mainly working the export markets, some small farmers in Estonia are growing hemp for hulling and oil pressing for the local market, Kesa said. Estimates for that domestic production have been in the 20-ton range.

While Estonian hemp growers have mainly eschewed the lucrative CBD sector, and no known operators are farming for fiber, Kesa sees the potential to grow into these sectors.

“We don’t see any slowdown in the demand from Europe and North America,” Kesa said. “So there seems to be a bright future for Estonian hemp farmers.”