European hemp hectarage grew by 8,000 ha (circa 20,000 acres), rising to more than 33,000 ha (circa 81,000 acres) in 2016, according to recently released figures from the European Industrial Hemp Association (EIHA). That topped previous EIHA predictions a year ago that foresaw the number of hemp fields across the continent remaining flat for last year against the 25,000 ha planted in 2015.

The report would seem to indicate ongoing stability in Euro hemp farming, which feeds raw materials to a balanced array of hemp sectors across the continent, led by food and health applications, including cannabidiol (CBD) products. The growth comes despite hiccups in the CBD sector and continuing lack of clarity over its legality in some Euro countries, and some alarm raised over CBD products on the U.S. market last year that hit European CBD exports.

France, long Europe’s leading grower, dwarfed all other Euro countries with about 17,000 ha under hemp last year. Tiny Estonia was a distant second with 3,500 ha planted, according to the EIHA figures, generally considered to be the most comprehensive data on Europe’s hemp markets. 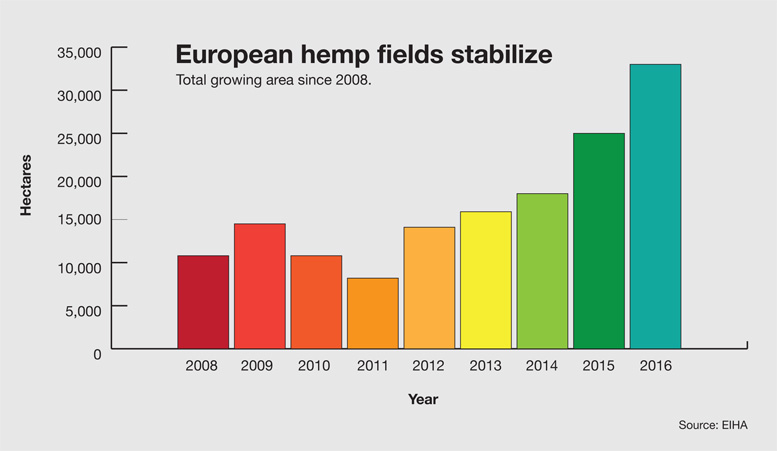