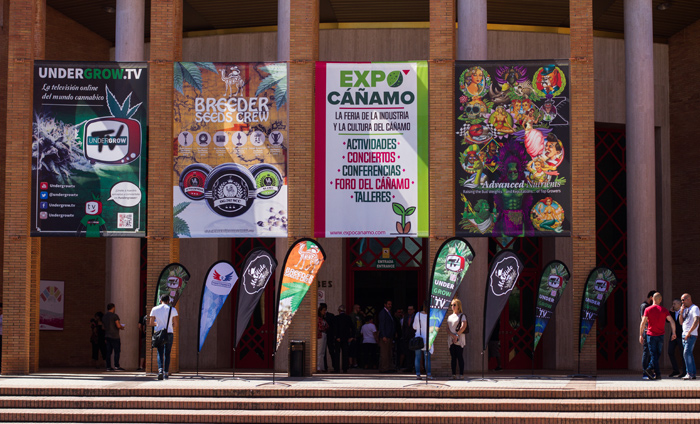 FIBES (Palace of Exhibitions and Congresses), site of Expocáñamo in Seville, Spain.

Expocáñamo, May 11-13, will explore Spain’s potential to develop a viable hemp industry.

A growing number of entrepreneurs are jumping into the business, with interest catching on among researchers, farmers, processors and other entrepreneurs, Jesús Díaz of Dana Agronomics, a Spanish hemp industry adviser and developer, told HempToday. All the while, the Spanish consumer is buying more and more hemp products, Díaz notes.

Reflecting growing interest in Spain’s nascent hemp industry, the crop and its possibilities are taking a bigger and bigger stage at Expocáñamo, the Seville-based cannabis expo and forum set for May 11-13, 2018. This year marks the fourth edition of Expocáñamo. Exhibits of industrial hemp products and seminar sessions focused on hemp will explore food, health, textiles, construction, new products and machinery for harvesting and processing.

While estimates for 2018 indicate an increase in the agricultural area destined for hemp growing in Spain, hemp stakeholders say facilities to process fiber for things like construction materials and textiles are lacking. And while some in the industry are looking into CBD production, the regulatory environment makes that a risky proposition for now, according to Diaz.

“Without an integral regulation based on scientific and social evidence, we’ll hardly be able to compete in the world market for hemp,” Díaz said. “We need an enormous effort of education and awareness among the authorities, farmers, growers, users and other agents involved in this plant and this industry.”

Still, the Spanish market for hemp products expands – especially for food made from hemp seeds and supplements based on extracts rich in CBD and other cannabinoids.

Hemp has been present on Spanish soil throughout the centuries, and long before there were laws regulating its cultivation. Hemp farming is recorded in the time of Carlos III in the 18th century, when it was grown across the plains of Granada and Segura.

As hemp began a resurgence in the 1990s in Europe, Spanish hemp fields revived to reach 16,507 hectares in 1998. However, after European Union subsidies in were discontinued in 2001, the only region that has continued to grow industrial hemp has been Catalonia – where the crop has been grown mainly for the production of textiles and seeds.