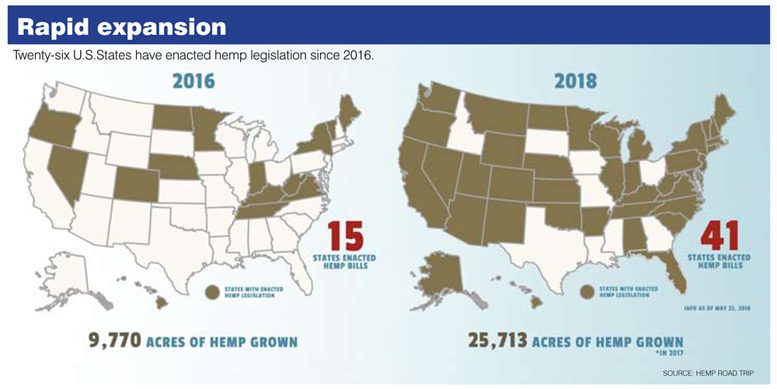 Illinois is the latest state in the USA to set rules allowing for the farming and processing of industrial hemp. Under a law signed by Gov. Bruce Rauner earlier this week, stakeholders can grow and produce products from hemp under state permits. Significantly, the law allows processors to extract CBD – the highly valuable compound that’s in the midst of a boom around the world.

One of the vast Midwestern plains states in the USA, Illinois has roughly 25 million acres (10 million hectares) of farmland and 75,000 farms. The state is known mainly as a grower of soybeans and corn.

“Legalizing the farming of industrial hemp just makes good sense,” Rauner said in a statement upon the bill’s signing.

The law sets a licensing program for growers and processors under the state Department of Agriculture (DOA), which will monitor crops for THC content; hemp may not exceed 0.3% THC content in the U.S. and Canada. Unlike some state programs in the USA, Illinois set no limits on the number of licenses it can issue. The Illinois DOA is obligated to set up the licensing program in the next 120 days.

Hemp can bring a “new sustainable agriculture industry and millions of dollars in investment and economic growth to Illinois,” Jen Walling, executive director of the Illinois Environmental Council, said in a statement. “Industrial hemp will bring new opportunities to Illinois farmers.”

More than half of all U.S. states are in advanced stages of getting hemp laws on the books and booting up state-managed pilot programs under a federal Farm Bill that is about to be updated.