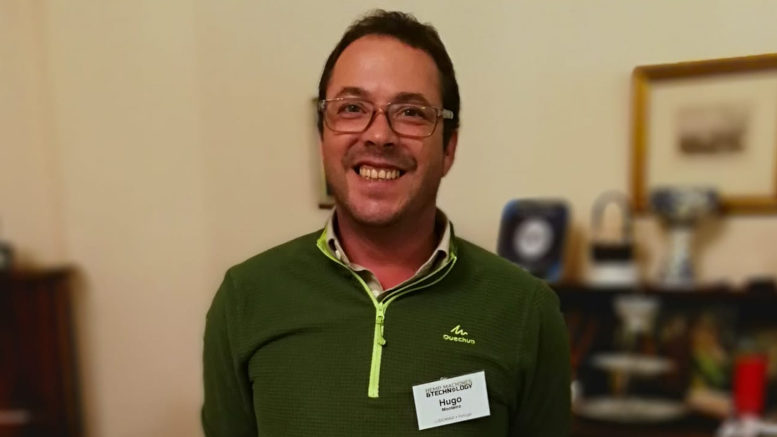 Prominent hemp entrepreneur and activist Hugo Monteiro was arrested on drug charges in Portugal last week amid a lingering, contentious situation between hemp businesses and the government.

Monteiro, a hemp farmer and producer, and a founding member of the Agricultural Cooperative of Hemp Producers (LUSICANNA) in Portugal, was taken into custody last Thursday, Sept. 9 by the National Republican Guard (GNR) in Serpa, in the district of Beja in the central Portuguese region of Alentejo. He was released during a hearing of the Serpa Judicial Court on Friday.

Monteiro is among several Portuguese hemp farmers who have criticized the country’s General Directorate of Food and Veterinary Medicine (DGAV) for failing to provide hemp growing authorizations until it was too late to plant hemp for fiber and grain this year.

And he is not the first hemp farmer in Portugal to suffer arrest. Most recently, police in July arrested long-time hemp grower Barry McCullough, who was also raided by officers of the GNR, in the Estremoz municipality of Évora, also in the Alentejo region. Agents seized plants, juices, dried and packaged goods, and planting seeds in that raid, along with McCullough’s mobile phone and computer. He was accused of drug trafficking.

In that case, GNR admitted it could not distinguish hemp from marijuana and referred materials seized from McCullough to the Scientific Police Laboratory.

The same seems to be true in the case of Monteiro. Cannareporter.eu reported that an officer who answered the phone in Beja Territorial Command said he was not sure whether the seizure from Monteiro was marijuana or hemp.

Monteiro, who has been a vocal critic of DGAV, had sent a letter to the agency Aug. 27 expressing frustration over licensing delays, and indicating he intended to plant a hemp crop. Ten days later he was arrested by GNR and told that his farming application to the DGAV had been rejected, according to Cannareporter.eu.

Several farmers in Portugal are known to have put in hemp this year without having specific regulatory approval, presumably as a protest against DGAV licensing delays – and to keep their businesses going.

‘We decided to sow’

“We have all the necessary requirements and we consider your delay to be very detrimental to our campaign,” Monteiro wrote in the letter to DGAV, delivered by email.

“In early 2021, after receiving the first requests from your Excellencies, we took steps to obtain the necessary documents. We have been in this process since February, so we cannot be held responsible for delaying the requested cultivation authorization,” the letter continues. “After the initial unexpected constraints in the authorization process, we decided to sow about a thousand plants from the seeds that were authorized in 2019.”

Licensing is not the only challenge to hemp in Portugal. CannaCasa, the Portuguese hemp association, has repeatedly tried to get clarity on hemp from the DGAV in light of changes brought on by a European Court of Justice case last year which settled key questions about the legality of CBD.

Portuguese hemp stakeholders have also criticized rules in a new law covering medical cannabis and hemp which they say put undue burdens on the industry, and are calling for key changes. The law, which took effect earlier this year, covers licensing for the cultivation, manufacture, wholesale trade, transport, distribution, import and export of cannabis-based substances for medical and industrial uses.

Industry representatives have said the government failed to consider the concerns of hemp stakeholders in establishing a legal framework for hemp despite the industry’s many efforts to help shape reasonable rules.

Full letter (email) from Hugo Monteiro to the General Directorate of Food and Veterinary Medicine (DGAV):

[Robo-translation from the original Portuguese]

Addressed to the head of the Division of Varieties and Seeds of DGAV:

We have hereby cleared up some misunderstanding in relation to our industrial hemp cultivation operation.

We have been producing biologically aromatic and medicinal plants in the Vale do Guadiana Natural Park, in Serpa, since 2015. We were supported in the context of installing young farmers. The first few years were very difficult due to the extreme drought that took place, which led us to increasingly look for resilient crops that would allow for greater added value. We left perennial irrigated crops and opted for perennial rainfed crops, such as Rosmaninho Branco, Rosemary or Perpétua das sandy. We have experimented with ancestral crops such as true saffron (Crocus sativus) with great success, as it is a crop suitable for poor soil, which does not need water and has high added value.

Since the beginning, we have adopted techniques for regeneration of poor soils, namely the cultivation in “K-Line” lines that allow the retention of water in the soil and, in the long term, the increase of the humus layer. We practice “Biodynamic Agriculture” which has allowed us to recover ancestral farming techniques such as tuning in to the lunar calendar and the position of the main constellations. All these techniques show good results in our productions and especially in the regeneration of our farm.

After the big losses of 2017 and 2018, we were selecting what this land could give us. We decided to invest in the production of essential oils, as we had very positive experiences with our plants in distillation. This decision set our current course. We cannot produce large quantities, as we do not have water, but we can produce plants with a high content of essential oils, as the climate favors it.

It was in this sense that the opportunity for industrial hemp arose. We started in 2018 with the first plantation, completely on an experimental basis. We were the first hemp essential oil producers in the country, which makes us very proud. I should mention that hemp essential oil does not have any amount of cannabinoids, as they are all eliminated by the temperature of the steam. It only has terpenes, like the other oils we make. We currently distill eighteen plants from this region. Hemp is without a doubt our innovation.

As an experimental culture, it was a success, as the adaptation to the region was good. Since then we have been improving the mode of production with all the existing institutional constraints. I must emphasize that we have always complied with, or have tried to comply with, the regulations for the crops in which we invest. Hemp was no different. We made all the procedures to have our operation regularized.

In early 2021, after receiving the first requests from your Excellencies, we took steps to obtain the necessary documents. We have been in this process since February, so we cannot be held responsible for delaying the requested cultivation authorization. This authorization request in 2021 comes in the sense of complementing our production experience, with oil production from cold pressed seed.

After the initial unexpected constraints in the authorization process, we decided to sow about a thousand plants from the seeds that were authorized in 2019, in order to adapt the crop to the oil from the seeds. That is why we already have some plants in the field, from authorized and certified seeds, and we are waiting for your authorization to increase this experimental production. These seeds are from a certified lot and we already have analysis of the production that we send in the attachment.

Our aim remains to experiment and demonstrate agronomic techniques that are favorable to soil regeneration and capable of giving an economic return to young farmers, which motivates them to make a change in their lives in a more sustainable way.

I am available for any clarification in person or online.