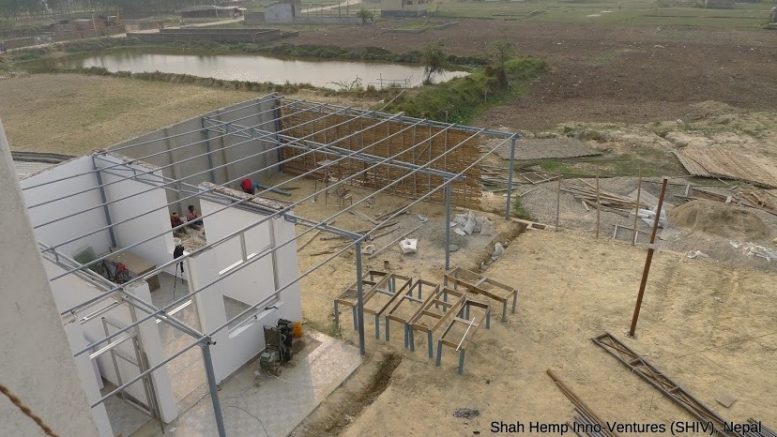 Overview of the hospital site at Janakpur.

Shah Hemp Inno-Ventures (SHIV) has started hemp-based construction of a waiting room and 4 staff rooms for a hospital at Janakpur, Nepal.

SHIV, launched earlier this year and based in Kathmandu, has a strategy to use straw from Nepal’s abundant naturally occurring hemp fields as raw material for a mass-scale rebuilding initiative. It’s the company’s response to the massive earthquake in April 2015 that destroyed as many as 600,000 homes and countless public buildings in the country.

For the startup project, locals decorticated the hemp stalks by hand and supplied both chipped and unchipped hurd, said Dhiraj Shah, SHIV’s Founder and CEO. “We used local lime — which is sold as whitewash here, mixed with brick dust, so it was a combination of expensive and low grade materials. We also got lime binder of 90% and 95% from India,” Shah told HempToday.

Local laborers are employed on the project and are learning the technology, Shah noted, and will use that knowledge as part of the building team that will complete the entire hospital complex.

The waiting room now under construction is 6m x 9m and each of four staff rooms being built is about 3m x 3m. Framing is primarily from steel, Shah said, while some bamboo is also in the walls but not for structural strength.