TVM says the brand names are a nod to the past confusion between hemp and marijuana.

A small family winery has put Texas’ first hemp-infused wine drink into retail distribution this week after two years in development. The company, TVM Wines, says it is also the first such product to meet all legal requirements under the U.S. Department of Treasury’s Alcohol and Tobacco Tax & Trade Bureau (TTB).

“Our goal is to not only reach wine drinkers but those that normally would not drink wine,” said Ron Mittelstedt, TVM’s Chairman and co-founder of the company with his wife Cindy five years ago.

Mittelstedt said he was first approached with the idea of creating a hemp infused wine back in 2015 and although skeptical, began to look into the possibility. In 2017 the Mittelstedts’ daughter Elease Hill joined the business and with her sister Beth started further research into methods for infusing TVM wines with hemp. 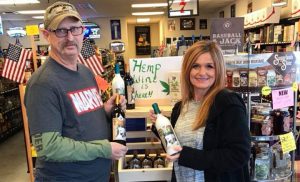 Triple D Liquor of Weatherford, Texas, is one of the first outlets to carry TVM’s hemp-infused wine drink.

TVM eventually partnered with specialist bottler Top Shelf Blends, Tulia, Texas, to work out the right mix for the drink, file the necessary paperwork with TTB, and bring the product to market.

“We submitted the formulation over and over,” said Hill, who serves as TVM’s vice president of sales and marketing. “We were denied multiple times because we had to have our testing paperwork on the hemp perfect due to the oversight of the DEA and the strict rules put into place for all hemp products.” Approval was finally granted Dec. 1 of last year for the formulation and the labeling.

TVM Wines has distribution in the Albertsons grocery chain and a number of independent liquor stores in the Dallas/Fort Worth area in northeast Texas, and will be in some outlets of the H-E-B grocery chain starting in April, Hill said. The family also makes traditional wines under a separate company, Sweet Spring Winery.

Hemp infused wines are for sale around Europe, and in the USA Kaelan Castetter, a student at Binghamton University in New York, last year launched a hemp-infused wine under the Sovereign Vines brand.