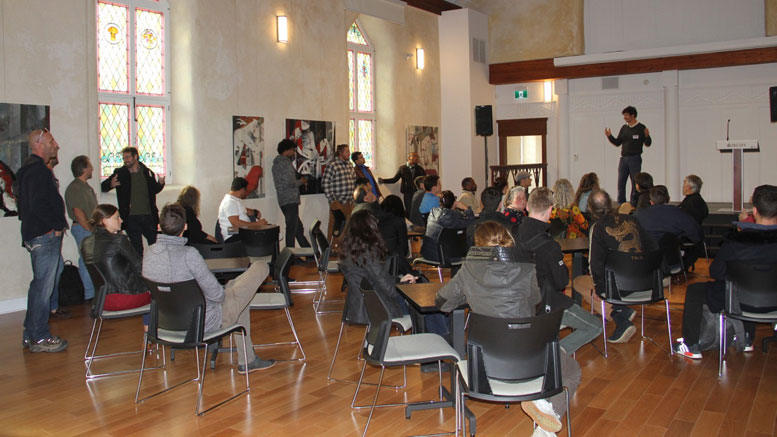 A total of 76 delegates from 14 countries recently attended the 7th Hemp Building Symposium of the International Hemp Building Association, held in Quebec. IHBA Director Steve Allin reflects on all the excitement.

It just happened to be on the 20th anniversary of Gabriel Gauthiers’ trip to attend a hemp building course with Yves Khun that we began the 7th Symposium in Montreal this year.

So maybe we can say that building with hemp has finally come of age. The timespan now present in our experience provides a solid foundation to begin the wholesale roll-out of this system and there was a large audience from the North American continent present to absorb the wide range of presentations.

The global travel plans of two of the most active hemp construction researchers happened to coincide very neatly with our event this year as Frederic Sallet and Stephan Hans of ENTPE were traveling back from Costa Rica after visiting IHBA members Zegreen Lab; and so we were able to divert them to present the findings of their research.

Stephan started off proceedings with his research into the structural improvements provided by a sprayed hempcrete infill to a timber frame, which in fact doubled the capacity to withstand forces likely to be exerted on such panels in normal “earthquake” conditions.

Then Frederic, assisted by Ashley Javogue, explained his recent investigation into similar vegetable materials to substitute in a “hemp building” system. The research commissioned by Zegreen Labs, initially compared 8 materials, hemp, miscanthus, coffee skins, flax shives, rice husks, nettle core, Bagasse and sunflower waste, some of which showed promise, others that reacted negatively with the binder.

A replacement for hemp?

Bagasse was chosen as the best alternative to hemp as it performed well initially and is a widely available material in Costa Rica and many regions of the world being one of the most widely grown crops globally. Further tests showed that it was certainly a possible replacement for hemp at least until hemp production could be established in a region.

ENTPE the main research body who have investigated hemp building materials in France were represented by Fionn McGregor who presented his findings about the thermal behaviour of sprayed hempcrete. This brought up the problems of including the effects of water vapour we know to be beneficial with Hemp but are difficult to both measure and explain as a value.

From research in UK and Ireland . . .

After the coffee break and intense networking session, we were treated to more research, this time conducted in the UK and Ireland. Neal Holcroft had previously presented at our 5th Symposium in Germany when he was a working on his Masters degree at Bath University in the UK and it was a real pleasure to meet him again. He is now working for the Canadian National Research Council so it was convenient for him to travel to Montreal to present his final findings regarding Hempcrete used as insulation against a masonry wall.

We then enjoyed Liam Donohoes presentation on the first stage of his Masters degree research into classifying hempcrete at Dublin Institute of Technology. Very rarely are so many variations of a material tested and the final results will be a very valuable resource for all those wishing to develop locally sourced materials.

All the scientific presentations connected perfectly with the other projects and presentations that were to be made later in the event in that the research into the structural improvements to a timber frame for use in hempcrete construction were connected to the work being done in Mexico by Steven Clarke; as did the research into alternative fibres where he is using coconut as an alternative to hemp. The thermal behaviour research of both Neal and Fionn both applied to the site visit we all made later on the first day to the town of St Jean sur Richelieu.

It has always been an important element of our Symposium that we take a break from sitting and listening as delegates to get out and visit some projects or activity connected with what we are discussing, in the real world, so to speak. The renovation of the church and diocese house adjacent to the Symposium site, using sprayed hempcrete and hemp plaster was beautifully executed by Artcan, and Gabriel explained the background and the details of the job to the gathered delegates. Everyone was affected by the quality of the air and acoustics of the finished building and many remarked on the pleasant odour that reminded them of their youth spent whitewashing with the grandparents.

On Day 2: The Dreamers

The second day began with dreams from dreamers as this is where all plans start. Donald Gauthier and his son Phelan came from Cape Breton Island to explain the work they have been doing with Arcadia University to establish the groundwork for getting hemp production off the ground.

Long time IHBA member Valerie Bline conquered her nervousness and told us about her quest for establishing Hemp production initially in Prince Edward Island the smallest of Canadian provinces where she explored the possibilities of using Hemp as a building material by attending several courses and experimenting with insulating the porch on her home. She now plans to gather together a mobile Hemp demonstration unit contained in a Mobile Tiny Hemp Home and travel across the North American continent.

Dreams have to come true at some point if they are worth anything and to show how that is done I invited Terry Radford of JustBioFiber to come to show us his new hempcrete building block which has recently had great exposure on TV with the building of the first such House on Vancouver Island using the interlocking internal framed block which was inspired by Lego.

Other dreams come in the form of well laid plans and Emily Peyton of Helpfully Green in Vermont explained how the activism she has been involved in, including running for Governor led her to employing Joseph Cincotta to design a flagship building for her. Literally formed as a ship or “ark” the plans looked both graceful and well thought out.

I was particularly interested in hearing from Steven Clarke about his work in Mexico as we have been in erratic contact since I first met him at the 2nd Symposium in Spain many years ago. He did not disappoint and gave a well illustrated explanation of his wide ranging work with developing his own binders and utilising other natural materials used in conjunction or as a replacement for Hemp.

His experiments with coconut fibre have proved very successful and provide not only a replacement for hemp especially along the coastal regions but may also act as an imputes to allowing hemp production for construction in Mexico especially since the recent earthquakes. He received a standing ovation from the delegates.

After the break we were treated to presentations from two of the longest serving natural builders in Canada. Gabriel Gauthier, our host, described his activities over the last 15 years with his company Artcan showing us a great variety of projects he has worked on in the Quebec region.

Chris Magwood, who originally focused on straw-bale building has more recently chosen to work with Hempcrete from his new base at the Endeavour Centre in Peterborough, Ontario. He chose not to highlight his own projects but to expose the “carbon elephant in the room” as he described the most pressing issue of the construction sector.

With great style he very clearly outlined the facts surrounding the enormous contribution of using hemp-based materials can make to reducing our carbon emissions not only from manufacturing the material but also the use of the building subsequently. This is an issue I have been trying to alert the world to myself and Chris’s presentation will make that job much easier for all of us.

Our next presentation was to be from Dhiraj K Shah of Shah. Hemp, Inno-Ventures (SHIV) in Nepal but unfortunately the Canadian immigration authorities had other ideas and refused him a visa. As a result, his presentation was given by Steve Allin who helped explain how SHIV have grown by leaps and bounds from building the first Hemp wall as part of a waiting room for a newly built hospital in Janakpur to building homes for the disadvantaged Dalit community and a Montessori school in the last year and a half, to plans in the next year for several other dwellings and a large expansion of the hospital using hempcrete.

After seeing the enormous amount of work Dhiraj and his wife Nivedita have accomplished it was particularly ironic that the reason given for his visa refusal was an inability to prove he had employment in Nepal!!!

From working with crude jungle materials in Nepal we moved to the finest finishes achieved by Art du Chanvre under the leadership of artisan Anthony Neron who showed us many fine examples of his hempcrete and plaster work. Anthony was also keen to explain the ethical and emotional side of artistry.

Our event concluded with a duo of husband and wife Jayeson Hendyrsan and Kim Brooks who have been working away with Hempcrete on Bowen Island off Vancouver for 20 years. Jayeson helped me with the first Symposium in 2009 in my home town of Kenmare in Ireland and it was great to see him developing his concepts further. His company Hempcrete Natural Building are now offering a complete Hemp House that if needs be can be mobile or at least moved around a property. The complete unit is delivered to the site and the components assembled and finished there.