Rapid development of processing technology is needed as the price of labor grows in China, marking clear near-term challenges for the hemp industry in the world’s largest single hemp growing market.

An overview of the Chinese hemp market is one of two themes in a joint presentation from China’s Institute of Bast Fiber Crops set for next month’s European Industrial Hemp Association International Conference, Wesseling, Germany (near Cologne, June 1-2).

“We need to develop efficient mechanized production to reduce the costs of labor and enhance the economic benefits,” Wang Yufu of the Institute of Bast Fiber Crops at the Chinese Academy of Agricultural Sciences told HempToday this week ahead of next month’s EIHA gathering, the organization’s 13th.

Wang be joined by Institute colleagues Xiong Heping and Tang Shouwei in presenting an overview of the hemp situation in China as well as a separate presentation specifically on how bast fiber is used as livestock forage in China.

Growing for seeds in Europe

Another key report from EIHA to be presented at the conference shows hemp growing for seeds climbed by 92% across Europe between 2010 and 2013. Meanwhile the production of hemp flowers surged by 3,000% in the same period, with flowers for CBD production giving hemp farmers “a considerable extra profit” in 2013, EIHA said.

The report, which follows a similar one that covered the year 2010, is widely considered the most recent and detailed market analysis of European hemp ever carried out. It is based on a survey by nova-Institute of Germany that probed cultivation, processing and applications for hemp fibres, shivs and seeds.

Some 11,500 tons of seeds were harvested across the continent in 2013 compared to only 6,000 tons in 2010 while flowers and leaves production ran to 240 tons in 2013 comparing to just 7.5 tons in 2010, according to the report. That increase was attributable to growth in the medical (THC/CBD), food supplements (CBD) and the production of essential oil for food and beverages, the report said.

Fibres and shivs production did not show any significant difference between 2010 and 2013, the report noted. 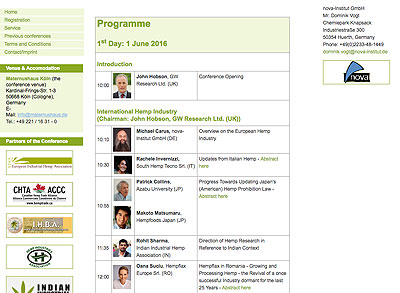 Also at EIHA this year: