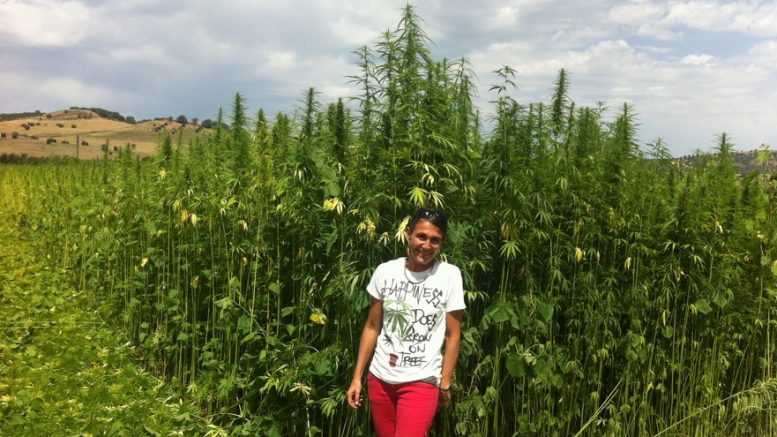 Rachele Invernizzi is a member and agricultural coordinator for south Italy at Assocanapa, Italy’s national association supporting the reintroduction of hemp cultivation and the use of hemp raw material for major industries. She is also President at privately-held South Hemp Tecno srl, a processor located in Crispiano-Taranto in southern Italy.

HempToday: What is South Hemp’s overall philosophy and approach to the economics of the hemp processing business?
Rachele Invernizzi: SHT was conceived first of all as a factory to process hemp straw and at the same time to be the first link in a local production chain. I always say that without a factory, you can’t make anything with hemp. But without a source for hemp, it’s useless to build a processing plant. We produce fiber and shives into raw materials for green building, paper (cellulose) and bio-plastics, polymers and bio-composites markets. The market for cellulose and bio-polymers will grow in the near future while green building is already a reality. We also make animal bedding and loose material for agricultural mulch.

HT: You’ve said hemp can play a part in keeping young people from leaving rural areas as it presents fresh business opportunities. Describe the best scenario in which this phenomenon could happen. In other words, describe this dream coming true.
RI: Hemp has so many applications that if the value chain gains strength, the industry in southern Italy will begin to work. As a result, young people will be able to find work without having to emigrate to the north of the country or abroad, as many do. They don’t necessarily have to be in agriculture, but can think of developing final products. It helps that the south of our country has some important economic aid from the European Union, many of which funds are targeted to young people who want to create businesses. With hemp you can do everything!

HT: Please describe how you obtain cut hemp from the field to feed your processing line. What does the supply chain structure in Italy look like, and where is South Hemp in that supply chain?
RI: Our chain operates across southern Italy, in eight regions.  After seeding, so from May onwards, we start holding meetings, conventions and conferences. We attract farmers, agronomists, industry associations, landowners and other potential end users. We talk about agriculture, agricultural techniques and everything needed to get them to conduct agricultural tests with hemp. We also talk about current markets for end-use, and possible opportunities based on those markets.

Farmers who decide to join call us in November and we make a list of all the people who are interested in planting hemp. We act as a medium for the supply of seed, which comes from Assocanapa, Ltd., a certified seed vendor.

Once the farmers have sown, we help them to prepare the paperwork to be sent to the police, we talk with the various police headquarters, which still nowadays aren’t up to date and can be obstructive. But we are now highly trained and and we’ve created conditions where they don’t confiscate anymore.

We sign a contract with each farmer for the transfer of the final goods, regardless of what the production is. We help those who need it with the sowing, and we monitor the fields for progress. At least a couple of times per growing season, I try to be at each supplier and in every field, which are within a 400 km radius. We give remote assistance, but if we’re needed, we go to the fields. This gives a lot of courage to farmers! Visiting farmers in their fields is the most beautiful part of my business. I see beautiful places, Italy is all beautiful, but the south and its people are special. Once the straw is ready, SHT withdraws it from the warehouse, pays the farmers and starts the round for the following year.

HT:  Can you talk about the growth outlook for your company? What do you expect over the next three years.
RI: Well, we’re not even one year old yet. But we are happy because with the arrival of spring the green building business has started, which today is our first focus. The ideal today is paying the expenses without having to invest more money — so breaking even is the first goal. We are in production since October and it’s all slowly cranking. We work very well with HempEcoSystems Italy srl, a hemp builder, and one of our first customers.

By the end of the year we’ll begin production of pulp to make paper. Right now, we’re  experimenting with a large and important Italian paper manufacturer who will buy the product. The other nice thing is that we are studying bio-plastic materials with the Nano Technologies University of Lecce, for further use of the raw materials. That market is growing rapidly and we are expanding.

After the third year of operation we expect to begin recovering the invested capital. But first we have the great task of creating the market, in all areas.

HT: What lessons were learned through the Assocanapa economic study that looked at the potential for the hemp industry in southern Italy?
RI: We learned that for the first three years you must invest; then you will have great return! More than the income statement, there’s a great thrill in being in a market at the very beginning of an era. Everything needs to be done, and that’s just fantastic.  The potential of south Italy both for agricultural production and for innovation is there, so establishing hemp markets is a key first challenge.

HT: What is your personal hemp history? When did you first get involved with hemp, and who influenced you along the way.
RI: I got a message in a dream. It was October 2011. At that time I had three possibilities. In Italy, the market for olive oil is very attractive. Olive oil is produced abundantly by us in the south. Then there was the hemp — something new and unknown but exciting. The third possibility, which I do not regret, was to do nothing and manage what little I had. It was obvious that hemp was the best choice.

I contacted the Assocanapa Association that same month, then in 2012 I planted 2.9 hectares that were seized as drugs. In that case, we’re at a stalemate after a year and a half of court sessions. Then in 2013 I became a member of Assocanapa Ltd. located in Carmagnola (Turin) and had a trial of 120 hectares sown in different areas of southern Italy. From there I decided to start up my own business and to create the first entirely Italian industrial plant for processing straw, which Assocanapa Ltd. proposed.

The equipment was made by them in Piedmont, in northern Italy, and then was transferred and mounted in Taranto at our place.

My hemp guru is Felice Giraudo, great reference for hemp cultivation in Italy, and the president of Assocanapa.