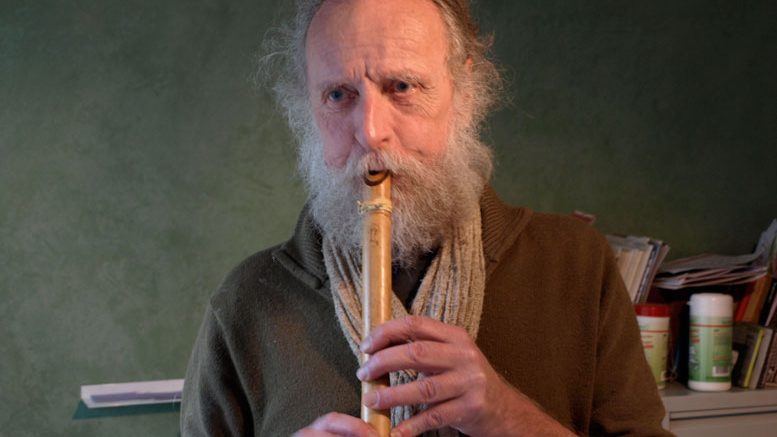 Wolf Jordan is one of Europe’s leading experts in the production of high quality natural paints, plasters and renders for the eco-construction industry. He is the founder and sole owner of Wolf Jordan & Co., which also produces binder formulas for hempcrete construction, and natural oils and waxes for wood and stone. Wolf is an old-world craftsman with more than 36 years’ experience, a lecturer, educator and innovator who has worked on natural building projects all over the world.

HempToday: Who would you say are the real pioneers of modern day hemp building in Europe? When would you say was the beginning of the modern-day hemp building movement?
Wolf Jordan: I’d point to Yves Kuhn with his project ‘Canosmose’ in the 1990s. Then came Britain with the first real big commercial building for the Adnams Brewery in Suffolk. Ian Prichett from Greencore Construction was involved with that project, which was something of a breakthrough.

Steve Allin, of course, who started the International Hemp Building Association, and who wrote “Building with Hemp,” still the

standard book for anyone who wants to work with hemp and lime. He started the “Building with Hemp” symposia and lectures all over the world. Steve’s doing an enormously important job spreading not only the word about hemp, but also the know-how.

Another pioneer is Monica Brümmer, an architect who set up Cannabric, a hemp block producing factory in Andalucia, bringing hemp into Spanish building. Now she is engaged in a stunning project in Morocco. Those are all people who helped to change the world, you know.

HT: What are the keys to a successful hemp-based build?
WJ: There are some important basics. Principles that are related to physics. Like the understanding of concrete, of binders with fillers. And of the composition of fillers. Many years ago when I stepped into my father’s business, I stepped into the classical building world, with cement, concrete, things like that. We sold machinery for building sites and for concrete factories, so I became familiar with physical laws that apply to mixtures that need a binder. I even sold sophisticated mixing machines for making polyester-concrete.

HT: That sounds like heresy, coming from a natural builder.
WJ: Some people never change, but I did. I became ecologically engaged, so I started to look for sustainable alternatives. This started with ecological paints. My grandfather, Frans Van Tongerloo, was an artist, so linseed oil and turpentine were absolutely part of my youth. From linseed oil paints to lime paints and lime renders was a small step.

HT: What are the mistakes to be avoided, both by the homeowner, and by the builder?
WJ: Often the binding process goes wrong due to a lack of water, or a mixture drying too fast, so the proper amount of water is also critical. And when you use formwork, pay attention that the mixture is well and evenly tampered. Steve Allin has developed a very simple but very effective wooden tool for that. The composition of the hemp shivs should be perfect. The lime should be the finest you can buy. Our European building history for over 2000 years shows the finest to be hydrated lime.

HT: How did you get introduced to hemp construction? Who was influential in your own development as a natural builder?
WJ: In my horse stables I used hemp shivs as bedding material. Then I read somewhere that people were actually building with hemp shivs and lime. I tried this out, of course. And it worked. I tried out several mixtures – like the French do, with hydraulic limes, but the foremost best results I got with fat lime putty as a binder. We make these putties. There are some inconvenient properties but, thanks to my many years of experience with hydrated lime, I found the solutions to deal with those problems.

In 2004 we built the extension of my workshop with hempcrete. Some trials went wrong (like using flax shivs instead of hemp shivs), but that was a very important lesson in what not to do!

Then I went to a workshop in France, organised by hemp farmers in the Charente, but I learned nothing new there on hempcrete. On the contrary, I had to explain how lime really works. But I did learn their traditional way of building breathable but dry floors, without plastic nor cement, which was worth it. This was 2006.

Then I went to the Hemp and Lime Congress organised at the Centre for Alternative Technology in Wales. That was very interesting. I met the engineers who developed and built the big Adnams project, and spoke to the architect who designed the Haverhill houses (one traditional house next to one hemp house and they followed up the situation. This was a very useful project that Steve Allin writes about in his book.

HT: What kind of material do you think makes for the optimal frame for hempcrete construction?
WJ: Hemp is the second fastest growing plant, sequestering incredible amounts of CO2. That’s one of the main reasons building with hemp is so revolutionary. The plant that grows even faster is bamboo. So, the combination of hemp with bamboo is an ecological blessing. If you consider that bamboo is also incredibly strong, then what are we waiting for? Even here in Europe you can grow bamboo you could use for frame structures. Big industry is not interested of course, as the stakes and the money are not big enough.

Next of course is wood. We have traditions in building strong frames with wood, so for me this is the second best option. In French Brittany, Kerterre, the eco building group, developed dome structures with the complete hemp plants. They soak them in lime and form domes out of them. Wonderful structures, very beautiful, very artistic and down to earth. But, as I said before, in natural building, the French generally tend to an organic style. That is not to everybody’s taste.

HT: How do you go about sourcing the pigments for your line of natural paints?
WJ: As much as possible, I go directly to the producers of the ingredients that I use. Most of them are sold by the pallet load, but the pigments are usually about smaller amounts. There are still a few natural pigment producers in France, besides I love France, so I regularly drive over to buy directly from them. But there are still some pigment mines in Europe that are on my to-do list.

HT: Who are the end users of your natural paints? Why do you think they go to the expense of such top-shelf natural products?
WJ: Practically all my products go B2B, to entrepreneurs, building and decorating companies, as well as specialized shops. Most end users are people who want to finish their houses with natural materials. There are also some institutions, like schools and historical monuments are done with my products. But what do you mean by “go to the expense?”

The general assumption is that high quality ecological paints are expensive. But our paints are generally some 20% cheaper than the synthetic equivalent. The world of natural minerals and agriculture has more stable pricing. This is also true for many other natural building systems as well, and especially for building with hemp and lime.

HT: How would you describe the level of enthusiasm now around hemp construction?
WJ: Whereas natural building in general was considered as some weird extravagance, this has totally changed. Especially for hemp construction. Look at the UK, where Marks & Spencer built a large commercial building employing hempcrete. Even here in Belgium, a supermarket has been done with hemp-lime.

That was a challenge, since the architects did not want the usual render finish, and instead wanted the hemp to stay visible. So I developed a special natural oil composition, which seems to work well to now. Four decades ago, hemp construction still needed to be invented, and now, to illustrate: our additive for an optimal and super-natural hempcrete goes to 14 countries in Europe. Plus the U.S. That’s growing business.

HT: At what place on planet earth do you feel most at peace?
WJ: Oh, I didn’t see that one coming. My inner peace is not necessarily connected to a special place. I have been able to create a wonderful job, where I can really do something for the environment, and for planet earth, and this is so satisfying.

But running a business can be quite stressful. From time to time I need a far horizon and a warm climate, so I begin to think Mediterrenean. Paulo Coelho wrote that we regularly need a wide horizon, so that our eyes, our view can take our soul with them, so that the soul can grow again.