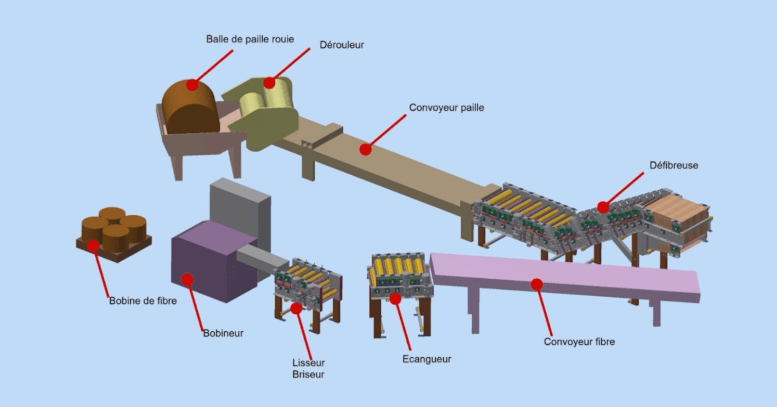 When I first got involved with attempting to set up an industrial hemp industry in Ireland I spent a lot of time with my colleague Terry Barman in Northern Ireland with people from the collapsing linen industry. There we learned a lot about the processes and technology of turning flax straw into flax fibers suitable for use in industrial processes.

This time spent learning about an established industry made me aware of how the use of hemp building materials would fit so well with the potential of hemp textiles as the value of what had previously been a waste product was now increased with its use as a building material.

I will always remember the look of scorn on the faces of the old men from the linen industry as they showed us a pallet sack of tangled hemp fibers sent to them by Hemcore, the early hemp company in the UK, to spin into yarn. They soon explained that what they had been sent was totally unfit for spinning and then proceeded to bring out hanks of flax fibers that looked like the lovingly combed locks of golden hair from a fairytale princess. The mess of hemp at our feet was obviously not going to be suitable, so we then realized that we would have to process the hemp in a more complete manner if we were ever going to make hemp textiles.

Most of the hemp processed these days in Europe is not suitable for spinning as it is processed by fast machinery into materials for the bio-composites industry where the parameters, though strict, are broader than those required for turning the straw into thread.

Terry and I spent many hours, days and weeks in hemp fields after that trying to turn our manual techniques for separating bast fibers and hurd into actions of mechanisms in a small mobile decorticator similar to the famous Schlichten machine of hemp history. This was beyond our financial ability as we soon found that developing machinery is a very expensive business, made all the more difficult by the narrow window of opportunity to test ideas on a growing crop that did not wait for us the get a component made.

Meanwhile Pierre Amadieu, an organic hemp farmer in France was having similar ideas to ours and getting further with his plans. Pierre first came into our orbit in 2011 at the second International Hemp Building Symposium in Spain, where he told us of his first version of this idea, named Starthemp. I later visited his prototype machine which was mounted on two truck bodies to see what he was up to. Like all such prototypes he was having some initial teething problems but I could see what he was aiming for.

Fast forward to today and Pierre has kept his determination to find a solution to this challenge and with updated machines from Hemp-Act has been successful. The implications for what he has achieved are not understood as yet by the hemp community but I am hoping that this year’s IHBA Symposium will change that. Our 10th event will be held in the hometown of Pierre’s ingenious team and lucky delegates will be able to see this machine in action turning hemp straw into not only a variety of hemp building products but also the fibers into a far more valuable income stream than previously possible.

I have always realized that the term “hemp building” had wider meaning than just construction, that it also could be applied to the act of building a hemp industry. This year’s Symposium will help with exactly that. As the sound of the bursting CBD bubble fades into the distance, those of us who know that hemp still offers so many potential cures for humanity’s ills will be glad to hear that the economics of industrial hemp are still sound and that the scope is massive.

Of course, other hemp outputs hold a lot of promise.

But hemp foods are still only really a niche market and fancy packaging is only really suitable for the world of supermarkets. It is far more likely that hemp seed sold loose in a farm market is the way most people will access hemp foods in the future, especially in the developing world where concentrated nutrition is so needed.

The clothing industry is more industrialized than food and very few of us will weave our own jeans or knit our own t-shirts. So if we are to replace cotton with hemp we will need to produce many thousands of tons of fiber to take our place at this table.

The same applies to building products. Very few of us will be able to reproduce the petrochemical wizardry of polystyrene foam or bond wood fibers into panels on our own. We need to replace unsustainable raw materials with hemp. So here are two industries complementary industries – insulation and construction – in which hemp can take a place. But to do so, we will need very large quantities of material and fast methods of applying building materials if we are to address the housing needs of the homeless.

Steve Allin is Director of the International Hemp Building Association. An author, teacher and consultant on ecological building, he has been building with hemp and promoting hemp’s use in construction all over the world for more than two decades. Allin is the author of “Hemp Buildings: 50 International Case Studies” (Seedpress, 2021), Building with Hemp (Seed Press, 2005, 2012), and an extensive collection of papers on hemp-based construction.