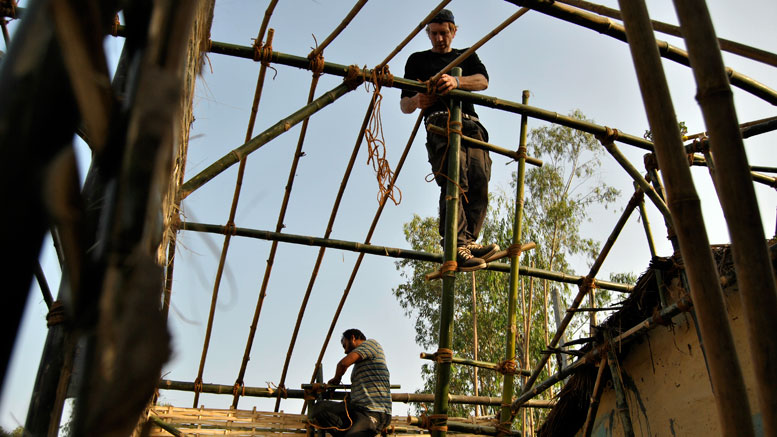 By the end of this year, a Nepalese widow and her four children will be under roof in a sturdy, healthy hempcrete-built home as startup Shah Hemp Inno-Ventures (SHIV) last week began construction of a dwelling for the family under its hEmpowering Bottom-Up initiative.

SHIV, which started as a hemp construction company with a mission to rebuild single-dwelling units after the massive earthquake that struck the country in 2015, quickly discovered that the need for housing in Nepal was greater than that required for quake relief.

“While working with the people and communities who were victims of the quake, we realized that there were a lot of people who never had a house even before the quake,” said Nivedita Shah, director of hEmpowering Bottom Up. “They are victims as much as those who had houses and lost them,” Shah said of the impoverished Nepalese — many of whom are considered “untouchables” on the lowest rung of Nepal’s rigid caste system.

Nepal’s national Women Development Advocacy Center (WDAC), a non-profit affiliated with the Social Welfare Council of Nepal, is a third partner on the project while two German firms, HempConsult GmbH and HemPro International GmbH & Co. KG, both of Dusseldorf, have provided the construction funding. Steve Allin, Director of the Ireland-based International Hemp Building Association, is the overall hemp building consultant to SHIV.

The pilot home building project, at Mithileshwar Nikash in southwest Nepal’s Dhanusha District, will re-house the family — a mother and children ages 6, 8, 12 and 14 who have been living in a clay and bamboo house that was in danger of collapsing. During construction of the new dwelling, they continue to live in their current house, which will be razed after they take up residence in the the new building.

The new home is built around a bamboo frame with a mixture of clay, sand and hemp hurd in the walls. SHIV processes the hemp hurd from naturally occurring hemp “wild crop,” which grows abundantly in Nepal.

SHIV is racing to complete the structure despite winter conditions that can make the process difficult. “The transportation of materials alone presents a major challenge,” said Dhiraj K. Shah, SHIV’s CEO and Nivedita Shah’s husband and business partner. “But the family’s current home may not survive as we get deeper into winter. It’s cracked in several places and one push could collapse the whole thing,” Shah said of the dire need for the new home, construction on which started Nov. 28. It is projected to be finished in the next week to 10 days.

SHIV is also getting help from French hemp building veteran Laurent Goudet, Director of Development at hemp construction firm Chanvre SAS and Gilbert Bauman of Luxembourg-based Bauman’s sàrl, a developer of hempcrete building materials and construction systems. In addition to working on the house itself, they are consulting and training locals in hemp building techniques to expand SHIV’s capacity.

The new house, at a cost of only €5,000, is one of three SHIV expects to complete in the first phase of its pilot building project. The company is also producing a range of hemp oils, creams and soaps as well as a line of hemp-canvas accessories such as backpacks, handbags and computer bags.

Contributions to support SHIV’s work in Mithileshwar Nikash, where the average monthly income is $10-$12, can be made through the initiative’s website.